My Kingdom for a Radi 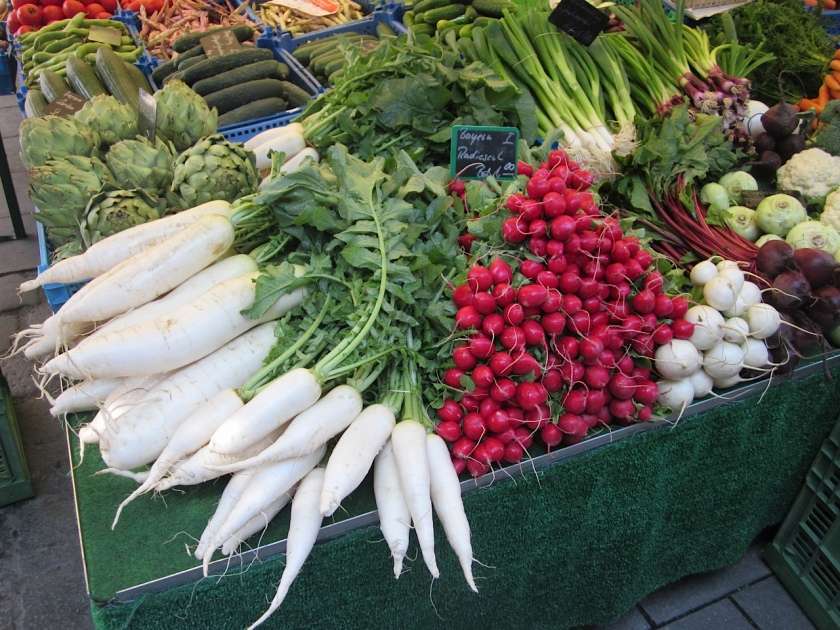 Can you be homesick for a place that’s not home?  Because I’m really missing Bavaria lately. And it has everything to do with my über-craving for a Radi (a giant white radish from Germany).  I keep twitching my nose while thinking Bavaria, but so far I haven’t left my kitchen.

I took this picture at the Munich Viktualienmarkt.  The Radis are the large white beauties underneath the artichokes.  I wish I could reach into this picture and pull one out.  Sigh. Bavarians eat Radis sliced VERY thin (they are often cut to resemble a slinky) and sprinkled with salt until the Radi “cries”.  Often, they are served with brown bread & butter with chives.  But my favorite way to eat a Radi is all by itself . . . mmmm.

And what do you drink with a Radi?  Well, a Bier, natürlich.  Whenever I’m in Bavaria, I make a B-line for a Radi and a Bier.  Opa (my husband’s grandfather) knows this, so every time we sit down at a restaurant, a Radi & Bier appears.  I don’t even have to use my mangled German to order.  It’s glorious!

I can drink Bier in Germany for a few days, but then I have to switch gears.  And that’s when my  Radler binge begins.

What’s a Radler? In Bavarian dialect, Radler means cyclist.  A Radler is the Bavarian version of a sports drink.  It’s an extremely refreshing, low-alcohol drink made with beer and limonada (a German lemon lime soda with less sugar than American Sprite).  It’s usually a 50/50 mix of beer and soda, but the proportions vary according to who’s making it.

The Winegetter recently wrote a wunderbar blog post about Radlers.  Oliver does a super job delving into the history of the Radler.  Fascinating stuff.  I’ve been craving Radis, Radlers and Bavaria ever since I read it.  And btw, Winegetter . . . I’m on a Stiegl Radler Grapefruit mission . . . I’m turning over a lot of stones around here trying to find some!

So where do you get these Radlers?  A couple of years ago, I was shopping for wine (shocker) at Wegmans and I saw a bottle of Stiegl Radler on the shelf.  I thought it was a mirage.  I immediately bought every bottle they had.  For those of you on the east coast, I’ve seen it at Total Wine, as well.

A friend of mine recently told me about the Sam Adams version of Radler called Porch Rocker.  I wish more American breweries would jump on the Radler bandwagon.  This is an untapped market for summer refreshment.

So, I did a side-by-side Radler tasting between the Stiegl Radler Lemon and the Sam Adams Porch Rocker: Stiegl Radler Lemon:  The Steigl is a half-liter bottle.  I prefer this size.  I’ve already started hoarding this for the H3 (hazy, hot & humid) days of a Virginia summer.  This is the perfect beer for people who don’t love beer.  It’s not very beer-like.  It’s more like lemonade with a buzz.  At only 2.5% alcohol, you could drink these all day.  You see?  It’s a sports drink. Samuel Adams Porch Rocker:  The Porch Rocker is a standard 12 ounce bottle.  I love the name — makes me think about those Bartles & Jaymes wine cooler commercials of the 80s.  Definitely more beer-like than the Stiegl.  And more alcohol, too, at 4.5%.  The Porch Rocker is good, the Stiegl is better.  I cut my teeth on Radlers in Bavaria, so I crave the taste of the German version. Here’s the two side-by-side.  Porch Rocker on the left, Stiegl Radler on the right.  On an ounce by ounce basis, they both cost about 14 cents an ounce.