A Brotzeit for Deutschland 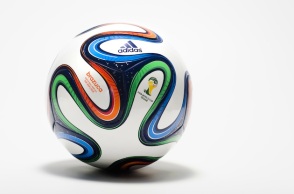 There are some very happy Germans in my house right now — a tremendous game by Die Mannschaft!  My kids are going to sleep in their Deutschland jerseys tonight . . .

I’m thrilled Germany won the World Cup, but I’m going to go have the World Cup DTs in a bad way tomorrow.  The World Cup has been the soundtrack to my life for the last month, and I’m really going to miss it.  I’m considering downloading that catchy ESPN jingle as my ringtone so I don’t have to go cold turkey.  But not to worry . . . my consolation prize is the Tour de France.  I’ve been a Le Tour fan for years, but now that I’m a fledgling cyclist myself, I have a whole new appreciation for hills.  I still don’t understand how people who are built like tree twigs can summon so much power from their legs.  These guys are climbing mountains most cars would balk at.  Incredible.

Football (the world kind) has been a constant in our family.  My husband’s grandfather lives in Munich.  When he was younger (he would say, “in former times”), he played professional soccer for FC Union Berlin.  My husband grew up playing soccer for 4 different teams in Southern California.  My mother-in-law used to referee men’s college soccer.  Yes, men’s college soccer.  My daughter has been playing soccer since she was four.  Me?  I played one season of soccer.  One spectacularly bad season of soccer.  Picture the worst kid on a rec soccer team. That kid looked at me and said, “I don’t think soccer is your thing.”  I have many skills, but playing sports games isn’t one of them.  I am, however an excellent spectator.

We cheer loud and proud for the German Fussball team at our house — in every game they play except when they’re playing the USA. Ich liebe Deutschland, but if you prick me, I bleed Stars & Stripes forever.  And right now, I don’t feel so bad about losing to the Germans 1-0 after they unleashed Blitzkrieg on Brazil last week.

Win or lose, we wanted to send Germany out of this World Cup with a Brotzeit celebration!
If you’ve never had the pleasure, Brotzeit is a traditional Bavarian snack, though we eat it as a meal.  It’s basically a smorgasbord — an array of bread, meats, radishes, and cheeses.  And beer.  Because beer is a side dish in Germany.

So what’s on our Brotzeit menu?  Along with some assorted cold meats and cheeses, we’re having Bratwurst and Weisswurst sausages.  Oh, and pretzels — you gotta have pretzels.  Most Americans are familiar with Bratwurst, but Weisswurst is less known (and less available) here in the USA.  What’s in Weisswurst?  I once asked Opa that question — he told me every butcher in Bavaria has his own secret recipe, which is German for there’s probably something weird in this.  I’ve heard rumors (totally unsubstantiated rumors) that Weisswurst used to be made with a pinch of cow brains.  But I’m almost positive it’s brain-free now.  At least that’s what I tell myself. 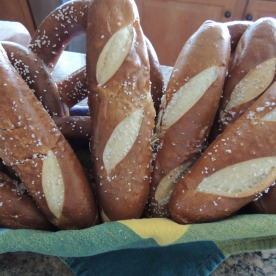 I also made sauerkraut.  Sauerkraut isn’t a traditional Brotzeit food, but I made some anyway (to go with the sausages).  I’ve converted many a kraut-hater with this recipe.  Straight out of a bag (or a can), sauerkraut is awful.  The bag is just the base — you have to embellish it.  It’s easy, I promise.  Be sure to notice the difference in color between the sauerkraut that came out of that bag, and the finished product.

And no Brotzeit is complete without Radis (German beer radishes) and radishes.  I cannot get a radi in the USA.  I’d give My Kingdom for a Radi.  I’ve tried growing them from seed, but it just doesn’t work (at least not for me).  A halfway decent Radi substitute is a Daikon radish.  Sliced über-thin and topped with chives on brown bread with butter . . . Wunderbar!

And what to drink with our Brotzeit?  Weissbier (wheat beer), naturlich!  Weissbier used to be scarce in the USA, but blissfully, it’s everywhere now.  Weissbier has a very low level of hops at 15 IBU (International Bitterness Units), which is why I love it so much — I can’t stand hoppy beers, they make my face pucker.  Weissbier is made by replacing part of the malted barley with malted wheat.  The Bavarians use a couple of special strains of yeast which give the beer it’s hallmark banana and clove flavors.

I’m sure it’s verboten to drink Erdinger Bier out of a Paulaner glass in Deutschland, but I’ll allow it here . . .

If you see the word Hefeweizen on the label, the beer will be in its traditional, unfiltered (slightly cloudy) form.  If you see the word Kristallweizen on the label, the yeast is filtered from the beer, giving it a crystal clear appearance.  You can also get a Dunkelweizen or dark wheat beer. Weissbier is served in a very specific glass, designed to hold every drop of the plus-sized Weissbier bottle (a standard US beer bottle is 12 ounces; a standard Weissbier bottle is 500ml, or 17 ounces).  Whenever we’re in Germany, I make a B-line for this beer.  It just tastes better in Bavaria.  Plus, it’s really fun to say “Weissbier, Bitte!”.