Today is Ernest Hemingway’s 115th birthday.  And if you’ve read more than a handful of my blog posts, you know I have a crush on Ernest Hemingway and his short, powerful sentences.

Last summer, we visited the Hemingway House in Key West.  If you ever find yourself halfway to the equator, I highly recommend a visit.  Though I recommend a winter visit, because the house is not air-conditioned, and the Mrs. Heminway of that time (Pauline) had all the ceiling fans removed in favor of fancy light fixtures.  Seriously.  Who removes ceiling fans from a house in Key West?  Apparently, Pauline thought the ceiling fans weren’t stylish enough. Sweating isn’t very stylish, either.  Hence the $20,000 swimming pool Pauline had put in while Hemingway was away covering the Spanish Civil War.  Hem was a little less than pleased when he found out how much the pool had cost him.  Reportedly, he threw a penny at Pauline and yelled, “Pauline, you’ve spent all but my last penny, so you might as well have that!”  Pauline had the penny cemented into the end of the pool.

Here are a few pictures I took on our tour — click on a picture to launch a slideshow with more detailed captions. 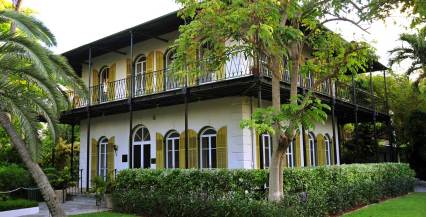 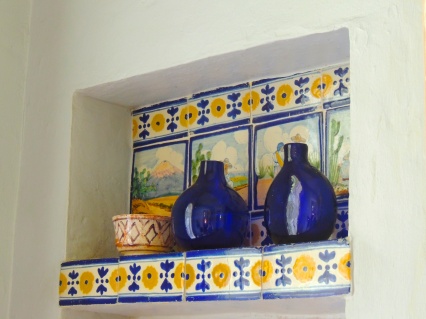 I loved this little alcove near the kitchen — Pauline bought the tiles in Spain. 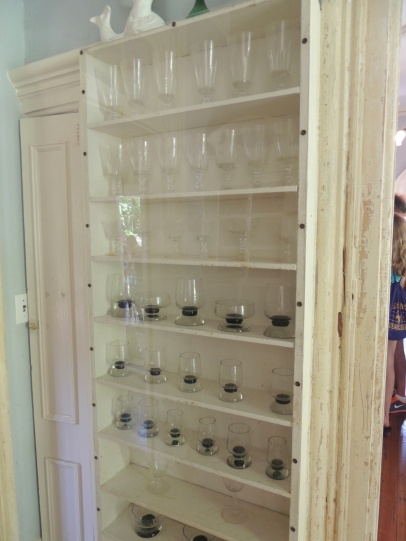 Hemingway’s wine glasses. There’s a basement in the house, which Hem used as a wine cellar.

One of Pauline’s fancy light fixtures. 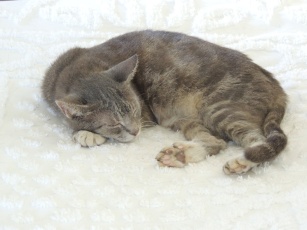 One of many descendants of Hemingway’s famous polydactyl (six-toed) cats. 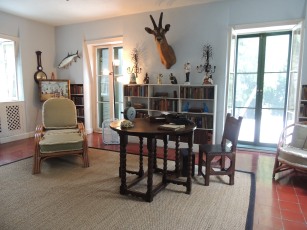 Hemingway’s office — he wrote there in the early morning hours, before it got too hot. After that, he went to the bar.

You need a swimming pool when you remove all the ceiling fans from a house.

Hemingway made a fountain out of an old urinal from Sloppy Joe’s Bar. Pauline added the decorative tiles. The cats use(d) it as a drinking fountain.

It’s not a secret that Hemingway loved to drink.  And he wasn’t a picky drinker, either.  He’d drink just about anything.  Phllip Greene wrote a fantastic book about all of Hemingway’s drinks called, To Have and Have Another.  It’s full of great recipes, history, and anecdotes.  If you’re a Hemingway fan, or just a cocktail fan, you’ll want to add this book to your collection.

In honor of Hem’s birthday, I’m trying a drink recipe from the book:  Green Isaac’s Special

This drink is one of Hemingway’s own creations (honestly, bar tending would have been an outstanding encore career for Hemingway).  While Hemingway lived in Key West, coconut water was one of his favorite cocktail ingredients.  And Green provides an excellent Hemingway quote in support:  “This is really going to be the hell of a fine house.  Will plant more limes and coconuts.  Wish you could plant a gin tree.”  Me, too, Hem.  Me, too.

The Green Isaac’s Special appears in Hemingway’s Islands in the Stream.  It’s apparently named after a Bahamian island (well, island is a bit of a stretch — it’s mostly a big rock) north of Bimini called, Great Isaac Cay.  Fresh, green coconuts grow everywhere in the Bahamas, but nowhere here in Virginia.  But thanks to the coconut water craze of late, I have an entire aisle of coconut water to choose from at Wegmans.

Shake all ingredients well with ice, then transfer contents of shaker into a collins glass, adding more ice as needed.  Garnish with a lime wedge or peel.

I don’t own a collins glass, so I repurposed a stemless wine glass.  I’ll say this much — it’s a pretty drink.  It looks like pink lemonade.  And, if I’m being honest, it tastes like unsweetened pink lemonade.  I can’t say I’m a fan.  Now . . . if I was sitting on Hemingway’s veranda in Key West in late July, and Hemingway himself handed me one, I’d happily indulge.  But I won’t make myself another one. 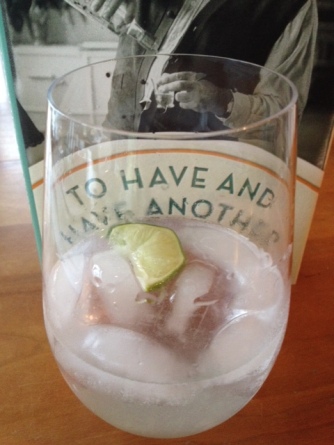