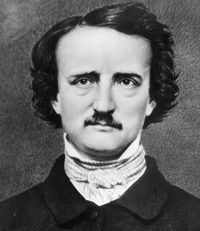 Edgar Allen Poe is creepy and unhinged.  Deliciously so.
A pioneer in the short story form of literature, Poe often blurred the line between genius and insanity for effect.  Admittedly, Poe is an acquired taste (kind of like beer) — you have to sample a few Poe stories before you really develop a taste.  Monday was Poe’s 206th birthday — and he wrote a whole creepy and unhinged story starring wine (sherry, really).  So, Mr. Poe gets the Wine, Words & Wednesday nod today.

Cask of the Amontillado is a short-story about revenge.  It was originally published in the November 1846 issue of Godey’s Lady’s Book (think pre-Civil War Ladies Home Journal).  Hang with me, and I’ll give you my 2-minute synopsis:

The protagonist (and I use that term über-loosely), Montresor, is upset with his wine-loving frenemy, Fortunado, for insulting him.  What exactly Fortunado did to wound Montresor’s feelings, we never get to know.  All we know is that Montresor is fuming mad, and he’s got murder on his mind.  Montresor decides to seek his revenge during Carnival, when he’s sure his friend Fortunado will be drunk . . . and pliable.

Montresor invites Fortunado to a private tasting of a special cask of Amontillado.  Capitalizing on Fortunado’s gigantic wine ego, Montresor tells Fortunato he bought the cask of Amontillado at a bargain price, but feels uncertain as to its authenticity.  And he needs an expert (Fortunado) to come and verify his find.  Montresor mentions he’s also invited another wine expert (Luchresi) to the tasting.  This really gets Fortunado’s feathers in a ruffle.  He dismisses the suggestion, calls Luchresi an ignoramus and says,

Amontillado is Sherry (darker than Fino but lighter than Oloroso).  Sneaky, Mr. Poe.

Fortunado then follows Montresor into the wine cellar of his house, which is located (naturally) in the catacombs, which are lined with hundreds of years of accumulated skeletons.  Because who doesn’t want to taste wine surrounded by centuries of skeletons?  At this point, Fortunado should have run screaming from the house, but he doesn’t.  He keeps on walking.  Because Fortunado is a dumbass.

While they’re walking through the catacombs to get to the cask of amontillado (which never really exists, btw), Montressor plies Fortunado with even more wine (he wants to make sure he stays good and drunk).  They drink a couple of bottles of Medoc and Graves.  Hey, maybe this isn’t so dumb after all.

When they arrive at the deepest-darkest end of the catacombs, there’s a big pile of bones on the floor, next to a small, mini-crypt. Montressor tells Fortunado the cask of Amontillado is inside the room.  So, Fortunado steps inside (I told you he was a dumbass).  And then Montresor chains his drunk (and oblivious) friend to the wall.  At first, Fortunado thinks it’s all a big joke, but quickly realizes it’s Montresor’s intent to wall him into the crypt.  Alive.

Fortunado then starts screaming . . . and Montresor mocks him.  Because Montresor is completely unhinged.  Eventually,  Fortunado falls silent, which seems to annoy and offend Montressor even more.  As far as creepy and unhinged moments go, this one is pretty intense.

So, if one of your wine-loving friends ever invites you to taste a special cask of sherry in the catacomb-cellars underneath his house, do yourself a favor and . . . RUN AWAY!!

True Confessions:  I knew Amontillado was Sherry, but beyond that, I can’t tell Amontillado from Fino from Oloroso.  I think it might be time for a self-guided Sherry Study!