I’ve been putting off reading Harper Lee’s “new” book, Go Set a Watchman.  It’s sitting on my night-stand, but I haven’t turned a single page.

I’ve been looking forward to this book for months, but I made the mistake of reading the reviews.  And now, I’m just not sure I’m up to having my image of Atticus Finch forever tarnished (if you haven’t read Watchman or the reviews, I won’t spoil it for you beyond that). The last time I saw Atticus Finch, he was good and moral and just and kind.  He was sitting on a pedestal, right where I left him.  And that’s how I want to remember him.

Is Watchman going to send a wrecking ball through my pedestal?

I know, I know.  I need to stop listening to the herd and just read the book.  Make my own judgement. Because, like someone good and moral and just and kind once said, “you never really understand a person until you consider things from his point of view, until you climb inside of his skin and walk around in it.”

Maybe Go Set a Watchman is an opportunity to climb inside Atticus Finch’s skin and walk around for a while.  Deep down, I know he’s not perfect.  He’s flawed, just like the rest of us.
I guess he has to be.

While thinking about all that, I came across a note Nelle Harper Lee wrote in September of 2008, bemoaning the death of printed media (in favor of e-reader mania).  The final line of her note reads: 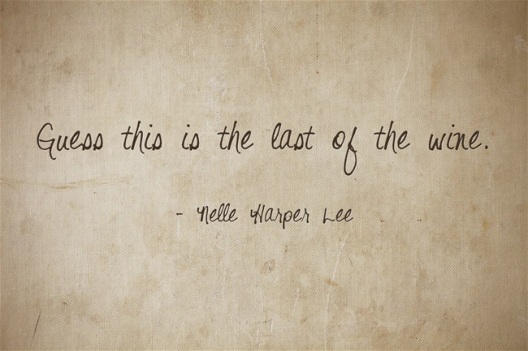 Wine as a metaphor for printed books?  Man, she’s good.

With Lee’s increasing age and declining health, this is almost certainly the last of her wine.

Have you read Go Set a Watchman?  What did you think??