According to local legend, sometime in 1865, a miner in Central Otago, New Zealand found the body of a young man on his property.  Lacking an identity or next of kin for the young man, the miner buried him, and marked his grave with a simple wooden plank, into which he engraved the words, Somebody’s Darling Lies Buried Here. 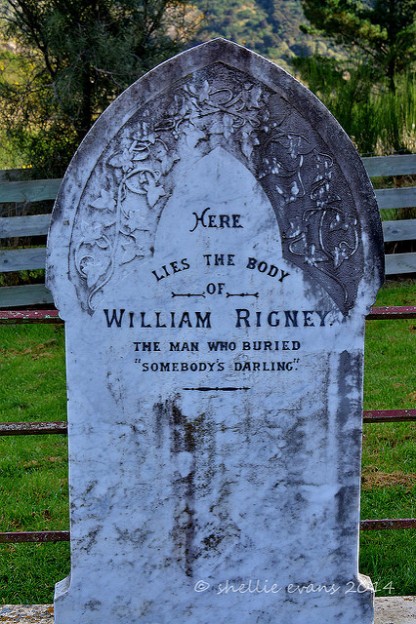 Some years later, it was determined (by people who determine things) that Somebody’s Darling was likely Charles Alms, a butcher who was thrown from his horse and drowned, while running cattle across the river.  Mr. Rigney himself wrote a letter to the editor of the Tuapeka Times in 1912, clarifying that he was not the one to find or bury the body (and doesn’t know who really did), but he did fashion the wooden headstone, and tended the grave for many years.

What does all this have to do with wine?

Fast-forward 150ish years.  Winemaking duo, Erica and Kim Crawford, bought 20 acres of land near those legendary graves to plant a vineyard.  Enamored by the local lore, they named their vineyard, Someone’s Darling.

Yes, that Kim Crawford.  If you’re a wine lover, you’ve almost assuredly tasted Kim Crawford Sauvignon Blanc.  Kim Crawford is one of America’s top-selling New Zealand import wines.  It’s everywhere.  To wit:  Sashay through the wine section at Costco.  I can’t remember a time when there weren’t cases of the stuff, stacked to the ceiling.

In 2003, Erica and Kim Crawford sold their eponymous winery to Canadian wine giant, Vincor (which is now owned by Constellation Brands).  Under terms of the sale, the Crawford’s cannot use their surname to promote other wines.

But the Crawford’s weren’t finished making wine.  And there are work-arounds.

Soon after the sale, Kim and Erica bought 180 acres in the Atawere Valley (on the northeast coast of the southern Island) near Marlborough, and the 20-acre Someone’s Darling property (further south) in Central Otago.  They named their winery, Loveblock.  On the Loveblock website, Kim is listed as the winemaker, but mononymously.  Kind of like Sting.  Or Bono.

New Zealand is the world’s southern most wine producing country.  And Central Otago is the world’s southern most wine producing region.  Central Otago is surrounded by mountains and dotted with lakes and rivers (see the map below).  Someone’s Darling Vineyard is located in Bendigo, which is one of the warmest subregions in Central Otago.  The vines are planted on north-facing slopes on sand over schist soil.  Pinot Noir is very happy there.

Loveblock Pinot Noir 2013  ⭐️⭐️⭐️/89
100% Pinot Noir.  Aged for 11 months in “older oak”.  Clear, deep ruby-red in color.  The nose is shy at first, but gentle coaxing (aka swirling) reveled strawberry, rhubarb, pomegranate and delightful little peeks of nutmeg and vanilla.  The palate is bright with ripe flavors of strawberry, raspberry and red plum with an encore of baking spices.  It’s a bit sassier than the Pinots I drink from Sonoma and Russian River Valley in California.  Medium+ acid balanced by conspicuous, but tame tannins.  Elegance and power, in concert.  13.8% ABV.  SRP= $37.  (But I found it readily available for $25ish on wine-searcher.com).

Loveblock is imported in the USA by Terlato Wines.  A quick search of the Terlato website told me I can find Loveblock at my local Wegmans and Harris Teeter stores.  Score.