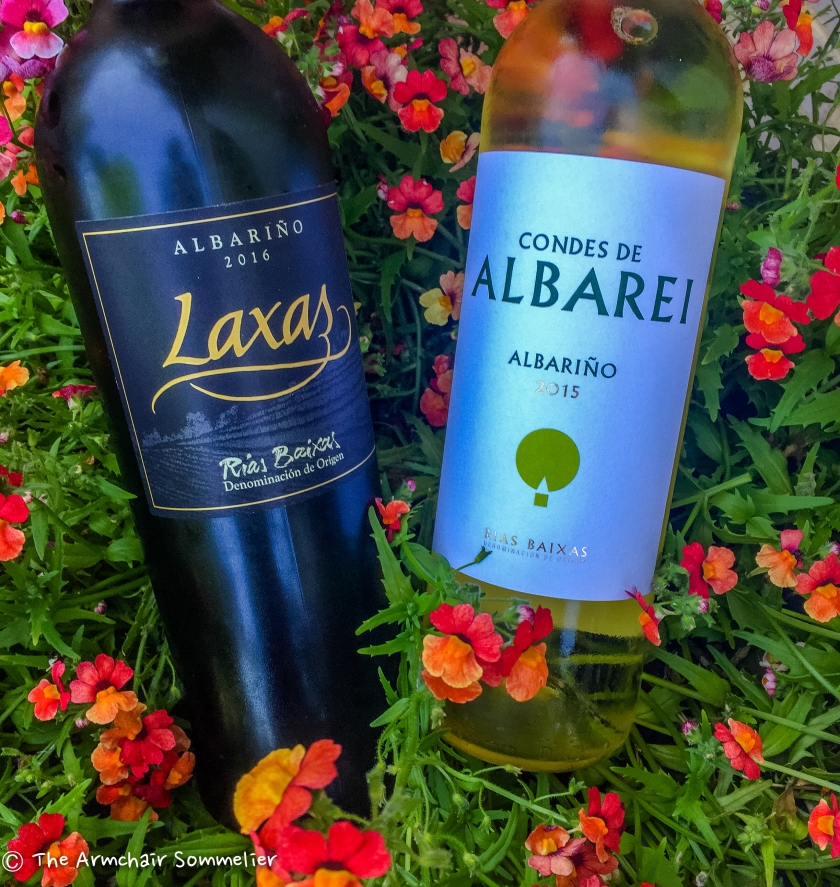 There are it wines and there are alt wines.

The most popular wine (the it wine) in the United States is Chardonnay.  Although, right  now, it feels like the most popular wine in the US is Rosé.  Earlier this week, I dropped by  my local wine store, and found not one, but four separate displays of Rosé.  #DrinkPink is everywhere.  And, inevitably, a bottle of Rosé managed to find its way into my cart.  But, I can’t remember the last time I went into a wine store and came out with a bottle of Chardonnay.  I don’t dislike Chardonnay, I just always manage to find a cart full of other white wines that look interesting before I get around to Chardonnay.

So what white wine is making it into my wine cart?  Albariño, the alt (alternative) wine.

Sidebar:  My college-age son is home for the summer, and he and his buddies get online and play some kind of team-based video game.  Which one, I couldn’t tell you — they all look the same to me, and the movement gives me vertigo.  But, apparently, when you want your character (or someone else’s character) to play an alternative role (one they don’t normally play), you yell, “USEYOURALT USEYOURALT!!!” loudly and repeatedly until this switch happens.  You never say, “please use your alternative character”, as this takes too long, and lacks the proper sense of urgency.

Albariño is a deliciously nifty white wine that hails from Rías Baixas (pronounced Rias Baishas), in the northwestern corner of Spain.  Rías Baixas is part of Spain’s Galicia region (aka Green Spain), which looks more like coastal Ireland than the typical mental picture of Spain (hot, dry, dusty, and hotter).

Rías Baixas has a maritime climate, heavily influenced by the Atlantic Ocean.  It rains lot in Rías Baixas, averaging 1800 mm (that’s just over 70 inches) per year.  By comparison, Seattle averages 38 inches of rain per year.  But, Rías Baixas also has 2,200 glorious hours of sunshine per year.  That’s plenty of rays for Albariño to ripen fully, yet keep its hallmark acidity intact.  It’s all about balance.

Over 99% of the wine produced in Rías Baixas is white, and Albariño represents 96% of all plantings.  Albariño is what they do in Rías Baixas, and they do it well.  Interestingly, 80% of the sales volume for Albariño is domestic, but of the exports, the United States accounts for most of that volume.  (I couldn’t nail down a figure for exactly what constitutes “most”, so just go with it.)

I’ve heard Albariño described as the ocean in a glass.  If your mind doesn’t work too literally, that sounds beautiful.  If you imagine a glass of Outer Banks salt water in a wine glass, then . . . well, not as beautiful.

Albariño is marked by high acidity, intense citrus and floral aromatics, and moderate alcohol. Often, there’s a slight saline quality to the wines (this is where you recall Rías Baixas is located right next to the Atlantic Ocean).  You can taste the seashells.  Seriously.  Many of the vineyards in Rías Baixas are enriched with local seashells, so picking up on that flavor (think wet rocks) in the wine isn’t completely loco.

The Rías Baixas Consejo Regulador (think governing body for the region) has been doing a bang-up job getting the word out about Albariño.  A few months ago, I attended the Tastemaker’s Table marketing event, hosted by Mark Oldman, celebrity author of How to Drink Wine Like a Billionaire (if you haven’t read it, it’s worth the $15).

Oldman calls Albariño, the #1 alternative (alt) to Chardonnay.  Why?

Because Albariño is a pleaser.

Albariño is a wine that pleads for food, but isn’t picky about what you pair it with.  The Golden Rule of Albariño is this:  if it lives in water, you can pair it with Albariño.  The Rías Baixas region has an absolute bonanza of seafood to pair with their local superstar wine.  My parents have friends who live in Vigo (see the map above), and the last time they were there, they had these for dinner:

Photo credits to my mom.

Yes, you eat them.

These are percebes, or goose-neck barnacles (the locals call them dinosaur toes).  Percebes are crustaceans that cling to sharp rocks in crashing surf.  Fishing for them is extremely dangerous, and they are extremely pricey (1 kilo hovers at about €350).  So, they’re hideous and expensive.  Naturally, they’re considered a delicacy.  My mom says they’re kind of rubbery and mostly taste like the paprika they’re steamed in.  But the Spaniards looooooove them.  I’m all about a good when-in-Rome travel moment, but I’d have to be pretty hungry (or three glasses of Albariño in) before these would seem like a good idea.

And what wine do you pair with dinosaur toes?  Albariño, of course!

You prefer food that lives on land?  Albariño is happy to help.  Spicy food?  Albariño can handle it.  I’ve even paired it with macaroni and cheese.  Delicious.  Albariño doesn’t know how to say no.

A quick caution about Albariño.  Be careful not to serve it too cold.  If you do, the aromas and flavors will hide from you.  Take it out of the fridge and let it sit for 15-20 minutes.  I stumbled across this unbearably cute photo at Bodegas Castro Martin Albariño.  Hopefully, this furry guy will help you remember.

Recently, I received a couple of Albariño samples, and since you can’t get percebes in Virginia (darn it), I decided to pair them with one of my favorite summer dishes, Maryland crab cakes.

Did you notice both of these wines are priced under $15??

Albariño isn’t likely to de-throne the it-wine, Chardonnay, (or find a hashtag to rival #DrinkPink) anytime soon.  So, if you like an alt wine, the next time you’re at your local wine shop, leave room in your cart for an Albariño or three.