Cocktail Bitters Review: The Good, the Bad, and the Undrinkable 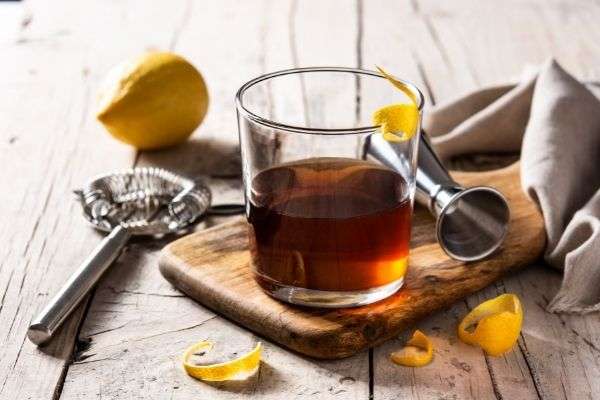 This was Week 2 of my WSET Spirits class.  We talked about brandy and bitters, and officially entered the realm of the obscure.

Bitters are a category of spirits that are made from various herbs, the blends of which are almost always some kind of state secret.  Originally, bitters were intended for medicinal use, as a cure-all for just about anything.  Within bitters, there are cocktail bitters (the most widely known being Angostura or Peychaud’s) aperitif bitters, and digestif bitters.

Cocktail bitters are extremely concentrated, and totally undrinkable on their own.  They are classified as an “alcoholic non-beverage”, which is why you don’t have to be 21 to buy them here in the US.  Aperitif bitters are normally drunk before a meal, to sharpen the palate, and digestif bitters (as you might imagine) are normally drunk after a meal to aid digestion.

Fernet-Branca
This is a digestif bitter herbal liquor from Italy (and the second most popular herbal liquor in the world, behind Jaegermeister).  The 27 herbs-and-spices-recipe is a Coca-Cola/KFC level secret.  It’s known only to a couple members of the Branca Family.  But rumor has it the ingredient list includes rhubarb, saffron, aloe, iris and myrrh.  Seriously.  Myrrh.  It’s is blackish-green in color, and tastes like mint-flavored motor oil.

But man, people (who aren’t me) love this stuff.  The Italians like it after dinner — they’re convinced it’s good for digestion.  The Argentines drink it mixed with Coca-Cola.  The Germans like to mix it with Red Bull (the Germans are crazy).  And mixologists (bartenders who secretly wish they were chemists) think its the second coming of cocktail mixers.

Back in 1962, Suburbia Today recommended it for “overeating, flatulence, hangovers, gas pains, and lifting yourself off the floor when you’ve mixed oysters and bananas.”  (That sounds like a cautionary tale if there ever was one.)  People swear it’s the world’s greatest hangover cure.  Right.  Probably because it induces vomiting.

Campari
Another Italian bitter herbal liquor.  Really, really bitter.  If you’ve ever accidentally tasted a raw artichoke leaf .  . . that bitter.  Campari looks like it would be delicious.  Originally, Campari got its distinctive red color from carmine dye, which is derived from a crushing a parasitic insect called the cochineal.  Yum.  (Campari stopped crushing cochineals in 2006).  Campari is made from another super-secret combination of bitter orange, rhubarb and quinine.  It’s is the key ingredient in the wildly popular Negroni cocktail, and all of Italy drinks it mixed with soda water or Prosecco as a spritzer.  My husband’s Opa loves this stuff (but he’s German, and Germans eat and drink lots of crazy Scheiße).  I just don’t get it.  Campari tastes like an extremely bitter orange-flavored cough syrup.

Żubrówka Bison Grass Vodka
Żubrówka isn’t a bitter, but it is obscure.  It’s a Polish vodka flavored with bison grass.  I know, I know.  Bison what?!?  This is proof that you can make vodka out of just about anything. I had never heard of bison grass before — it’s sweetgrass native to northern Poland.  Honestly, I’m not much of a vodka girl.  I’ve always found vodka to be pretty boring stuff.  But this was my surprise of the night.  Maybe it was just such a delightful departure from the Fernet-Branca and the Campari, but this one actually smelled . . . good.  Vanilla, almonds, and cinnamon.  It tasted light, clean, and refreshing.  I already bought my own bottle.

Grappa
Apologies to the Grappa groupies of the world, but Grappa is gross.  Grappa is an Italian brandy made out of pomace, which is literally wine leftovers — the skins, seeds, and stems that remain after fermentation.  And I have never had a Grappa I didn’t viscerally despise.  This one (and I have no idea who made this particular Grappa) was no exception.  Not just bad, but downright offensive.  It smelled like earwax, sweat, and cheese.

To be fair, no one else in the class was as offended by this Grappa as I was.  But everyone has their wine/spirits kryptonite — Grappa is mine.  Grappa has this odd, sinewy texture that you can almost chew.  To illustrate, our instructor asked us to take a sip and hold it in our mouths.

I couldn’t bring myself to taste it.  The potential for gagging was a little too real.  Completely undrinkable.  I would mix Fernet-Branca and Campari together and drink it before I drank a glass of this Grappa.  On the plus side, if WSET gives us a Grappa on the exam, I should be able to nail it.  If I hate it  . . . it’s Grappa!