Lutefisk: The Ghost of Christmas Past 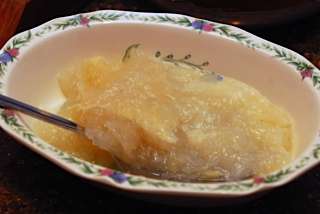 It’s not Christmas until we have Lutefisk.  My dad says those words every year, without fail.

In fact, it’s not Christmas until my dad says the thing about the Lutefisk.  My people (on my dad’s side) are Scandinavian, and Lutefisk has been part of our holiday feast tradition since the Viking Age.

I know what you’re thinking . . . Holy Mother of Snot, what the hell is that? That is the Ghost of Christmas Past. That is the King of the Beige Food Group. That . . . is Lutefisk!

Lutefisk comes from the Old Norse, meaning, Do you feel lucky?  Lutefisk is a Scandinavian delicacy, which we all know is code for “wow, does this suck”. Lutefisk is cod fish that’s been hung on racks and dried in the open air until it resembles fish jerky.  But it’s not done yet.  You might chip a tooth on cod jerky, so you have to soften it up a bit before you can eat it.  So, you reconstitute the cod in lye (yes, the same lye used to make soap, declog drains, and clean ovens).  As your cod soaks in its lye bath, it starts to gelatinize.  And, tiny detail — it’s also poisonous.  To make it edible again, it must be rinsed and soaked in water (that you constantly change) for four to six days.  Four is probably death, so I’d go with six.

Now that your Lutefisk is technically edible, you need to cook it.  Back in St. Olaf, you cooked your lutefisk in big enamel pots in your kitchen.  And because few smells are more offensive than Lutefisk boiling on the stovetop, this is an outstanding way to clear the house of any holiday company that’s on your last good nerve.  Is it really that bad, you ask? Lutefisk will singe your nose hairs — it smells like a dead fish wrapped in a sweaty sock left to ferment in a teenage boy’s bedroom.  Mmmm, Mmmm.

But Lutefisk has evolved.  Now, you can buy Lutefisk in hermetically sealed, microwaveable plastic packages that (more or less) contain the smell.

It’s skinless!  Right, because it’s the skin that would make the dish unappealing.

If you’re dying to try Lutefisk, you can call the Lutefisk Hotline (I am not making this up) at the Olsen Fish Company in Minneapolis.  The Lutefisk will ship to you packed in dry ice.  Just be sure you’re not out of town when it arrives.  Lutefisk that sits on your front step for 3 days reverts to poisonous.  Been there.  Done that.

Who do we have to blame for Lutefisk?  There are a bunch of stories that float around, but my favorite one says Lutefisk is St. Patrick’s fault.  Once upon a time, Viking raiders were pillaging Ireland (as Vikings do), and St. Patrick thought he’d teach those pesky Vikings a lesson.  So he attempted to poison the Vikings by covering their fish stores with lye.  That’ll teach ’em.  When the Vikings discovered the fish, they dug in (didn’t die) and declared it a delicacy.  It’s a good story, until I ruin it for you and tell you St. Patrick died centuries before the Vikings started plundering northern Europe.

Lutefisk is a dying tradition — today, more Lutefisk is consumed in Wisconsin than Scandinavia.  And now that I’m a grown up, I for sure don’t have Lutefisk on my Christmas table (sorry, dad).  There are many other (delicious) ways I can stay connected to my Nordic heritage.  Ostakaka (a Swedish almond cheesecake with an unfortunate name) will always have a place at my holiday table . . . but that’s a post for another day.

On the years we spend Christmas with my family, Lutefisk is a constant, even comforting presence.  It’s comforting because I know the words are coming . . .

It’s not Christmas until we have Lutefisk.

To humor my dad, and appease the Norse Gods, I have one (and only one) ceremonial bite of Lutefisk.  Honestly, it doesn’t taste like much of anything (other than regret) . . . it’s the texture that will kill you. Oysters and slugs have nothing on lutefisk.  Lutefisk is almost impossible to swallow, because it tries to crawl back up your throat.

And what does Lutefisk have to do with wine?  Uff-Da!!

It’s not Christmas until we have Lutefisk!

* This is my entry in the #MWWC5 (Monthly Wine Writing Challenge).  The theme for this month’s challenge is feast.  My brain went like this:  Feast > Vikings > Lutefisk.  Ta-Da!!