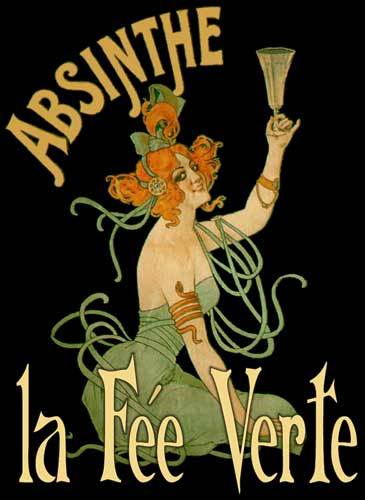 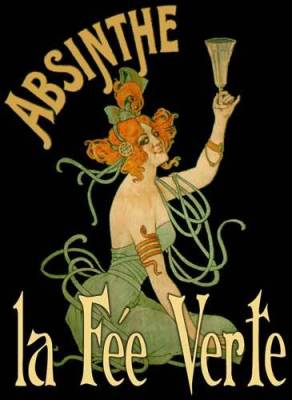 Absinthe, or The Green Fairy, has a reputation as a naughty drink with hallucinogenic superpowers.  I wouldn’t be surprised if The Green Fairy turned up as a super-villain in the next Avengers movie.  I’m not usually one to flirt with danger, but I’ve been curious about Absinthe for years. Does it really cause hallucinations?  Maybe she’s just maligned and misunderstood.

I just re-read Ernest Hemingway’s For Whom the Bell Tolls, and rekindled my Absinthe curiosity.  Hemingway’s protagonist, Robert Jordan, uses Absinthe to seek temporary shelter from the horrors of war:

“One cup of [Absinthe] took the place of the evening papers, of all the old evenings in cafés …. of all the things he had enjoyed and forgotten and that came back to him when he tasted that opaque, bitter, tongue-numbing, brain-warming, stomach-warming, idea-changing liquid alchemy.”

I’m not that excited about having numb tongue (I can get that at the dentist), but a warm brain and some idea-changing sound fun.

Absinthe’s origin story is a little muddled — it has roots in ancient Egypt, Switzerland, and France.  Originally, Absinthe was sold as a medicinal elixir — in the 1840s, it was used as a malaria preventative.  By the 1860s, Absinthe had become so popular in bars around Paris that 5:00pm became known as L‘heure verte, or The Green Hour.  And if you remember your wine history, that was around the same time as the great phylloxera epidemic and the resulting wine shortage/crisis in Europe.  With no wine to quench their thirst, Parisians succumbed en masse to the allure of The Green Fairy.

Absinthe was de rigueur in 1920s and 30s Paris with writers and artists like Hemingway, Oscar Wilde and Vincent Van Gogh.  In fact, there is speculation that Van Gogh lopped off his ear while on an Absinthe binge.  Not really a selling point.

There’s no shortage of Absinthe in works of art — apparently, Absinthe is quite the muse:

Inspiration and productivity sound pretty good, right?  Wrong.  Absinthe was a thorn in the side of teetotalers and prohibitionists.  They claimed Asinthe was an addictive, psychoactive, and hallucinogenic substance responsible for sloth, epilepsy, tuberculosis, and murder.  That rap-sheet was blamed on the compound thujone, which is a chemical found in the wormwood plant.  As it turns out, there are only trace amounts of thujone in Absinthe — not nearly enough to cause tuberculosis.  But most of the world (save for Spain and Portugal) pushed the panic button and banned Absinthe in the early 20th century.

Fast-forward 70ish years:  Absinthe has been experiencing a worldwide revival, becoming available once again in the United States in 2000. 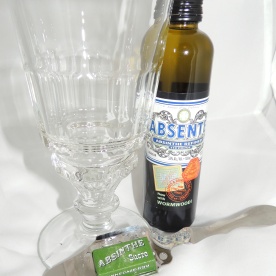 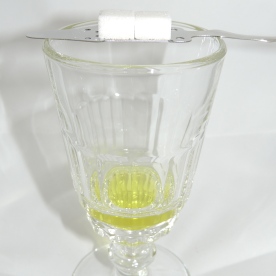 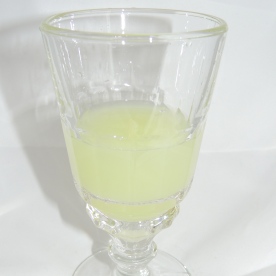 My first observation:  Wildly alcoholic is an understatement.  My bottle of Absinthe is listed at 55% alcohol.  And some Absinthe can reach an alcohol content as high as 70%.  By comparison, I have two bottles of Ouzo in my liquor cabinet — one is 40% and the other 49%.  Dang.

Well, it’s now or never.  Bottoms up!  See you in the Emergency Room.

The Green Fairy is cold, smooth and sweet, with a slightly creamy texture.  It tastes a lot like Good & Plenty candies, which I love.  If you aren’t a fan of black licorice, no amount of hallucination is going to make you like Absinthe.  But I find it lovely.  Maybe too lovely.  I could easily spend an afternoon drinking Absinthe.

And how do I feel after a glass of The Green Fairy?  So far, so good.  I’m not blind.  And I don’t see any big, pink rabbits riding unicycles through my living room, so that’s a plus.  I feel happy and calm.  Maybe even a little sloth-like, which I’m totally OK with.  My biggest disappointment? That I don’t suddenly have the ability to do Calculus in my head.  Dammit. 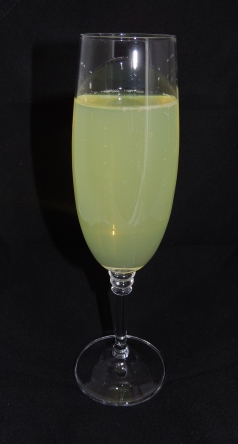 This is simply Absinthe mixed with Champagne.  Hemingway’s original instructions were as follows:

“Pour one jigger absinthe into a Champagne glass. Add iced Champagne until it attains the proper opalescent milkiness. Drink three to five of these slowly.”

I feel certain that last part was the most important to Hem.

If you’re thinking Champagne and black licorice don’t sound like they’d be good together . . . you’d be right. Sorry Hem, this is a terrible drink.  It’s aggressive and caustic.  I could use it to clean my jewelry.  If Hemingway routinely drank three to five of these (please, it’s Hemingway — it was probably more like six to ten), this now makes perfect sense: 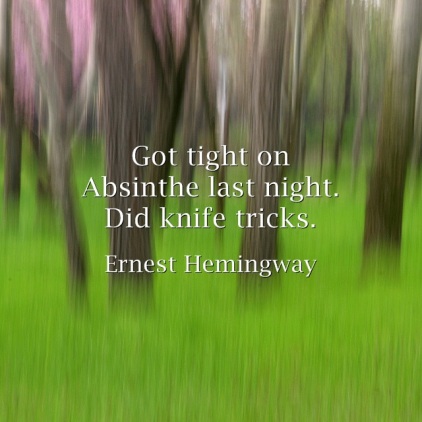 My Absinthe itch has been scratched.  I don’t think I’ll be a regular at the altar of The Green Fairy, but if I ever need a little writing muse . . . I know exactly who to call.

Starting to feel like we live on the ice planet Mothra over here. I’m way past over it. But . . . about to Zoom with my family, so feeling like some RdV Friends & Family is in order. Cheers! 🍷
Vaulting to the top of my travel list for when this scheiße-show of a pandemic is over . . . Sicily!
Made myself a beautiful blood orange Old Fashioned. Husband sees it and says, “Who murdered the oranges? They’re unsettling.” 🥃 🍊
It snowed again . . . so, hibernation food. Beef stroganoff and this brilliant MC4 Cabernet Sauvignon from Napa Valley. @mc4wine