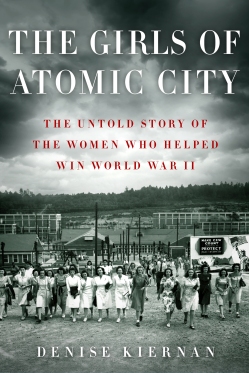 I just finished reading a book called, The Girls of Atomic City:  The Untold Story of the Women Who Helped Win World War II.  It tells the story of the tens of thousands of women who were recruited to live and work in a super-secret city in the Appalachian Mountains, built during World War II, for a singular purpose — enriching uranium.  Only no one ever said the word uranium.  The town of Oak Ridge, Tennessee, wasn’t on any map — it didn’t exist.  And the women who worked there worked in total secrecy, not only from family and friends on the outside, but from each other.  They were told not to ask questions (like, “Why can’t I find Oak Ridge on a map?”), their jobs so compartmentalized, no one was fully aware of exactly what they were working on.  The women were told only that what they were doing would help win the war, and bring the boys home.

Back in 1939, a couple of German scientists figured out how to split an atom of uranium. Über-smart science guys from all over the world got a little panicky as they collectively realized the potential danger if the Germans figured out how to harness that energy into a weapon before the Allies did.  The earliest front of World War II was active — the science front.

By 1939, scientists Albert Einstein (Germany) and Enrico Fermi (Italy) had both fled their respective countries, and were living in the United States.  Einstein was born a Jew, and Fermi’s wife was a Jew — both recognized the dangers of remaining in Germany and Italy.  Einstein and Fermi (together with a whole slew of other scientists) started sending up warning flags about the potential for a “new kind of bomb”, and the monstrous consequences if the Germans developed it first.  In this race, second place would be last place, so the US government secretly funded a project to design and build the atomic bomb — the Manhattan Project.

The first real breakthrough in the Manhattan Project came in December of 1942.  Scientists working in Chicago (Enrico Fermi chief among them), had finally created the world’s first ever self-sustaining nuclear chain reaction.  As far as scientific accomplishments go, this one was a biggie.  It rolled out the welcome mat for the Atomic Age.

I never gave any thought to how those scientists must have felt at that moment.  I don’t spend a lot of time thinking about nuclear reactions in general — the best experience I ever had in a science lab was leaving it.  But those guys (and one gal, I should point out!) must have felt like they discovered fire.  And they celebrated (and I use that word loosely) their accomplishment with a bottle of Italian Chianti:

I was curious why Wigner chose Chianti, so I went down the Internet rabbit hole to find out.  According to Wigner’s memoir, he purchased the bottle of Chianti months earlier in Princeton, New Jersey, and saved it, optimistic there would be a reason to open it.  Chianti was a special wine to him — it was the first wine he ever tasted, as a young boy visiting Venice, and its impression stuck with him.  And, having lived through World War I in Europe, Wigner feared the war would soon make it tough for Italy to export wine.  Wigner’s memoirs recall Fermi (not Wigner) opening the bottle, but that’s probably unimportant.  What is important is the scientists simply raised their paper cups of Chianti in a silent toast.  This was one of those moments that defied words.

Sidebar:  In his memoir, Wigner refers to the Chianti as “sweet”, which came as a surprise to me.  Was Chianti sweet in the late 1930s??  Wigner’s impression was less of a surprise: “What a beautiful, subtle pleasure wine gives.”  Hear, hear.

Here’s a photo of that signed bottle of Chianti, from the Argonne National Laboratory Energy Showcase: 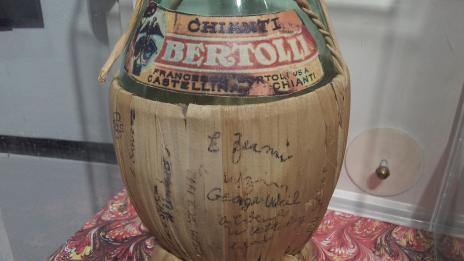 After the breakthrough in Chicago, the purse strings weren’t just loosened on the Manhattan Project, they were completely untied.  The uranium enrichment project in Oak Ridge went on, full speed ahead.  The women working in that secret city never knew (and if they suspected, they didn’t dare think it) what they were working on until the bombs were dropped on Japan in 1945.  The war was over.  Many of the women stayed in Oak Ridge after the war, others moved on.  But for all of the women, “a strange mix of . . . pride and guilt and joy and shame endured.”

If you’re interested in more, The Atlantic published many of Ed Wescott’s (the only authorized photographer at Oak Ridge) photos in a completely fascinating series:  Life in the Secret City.