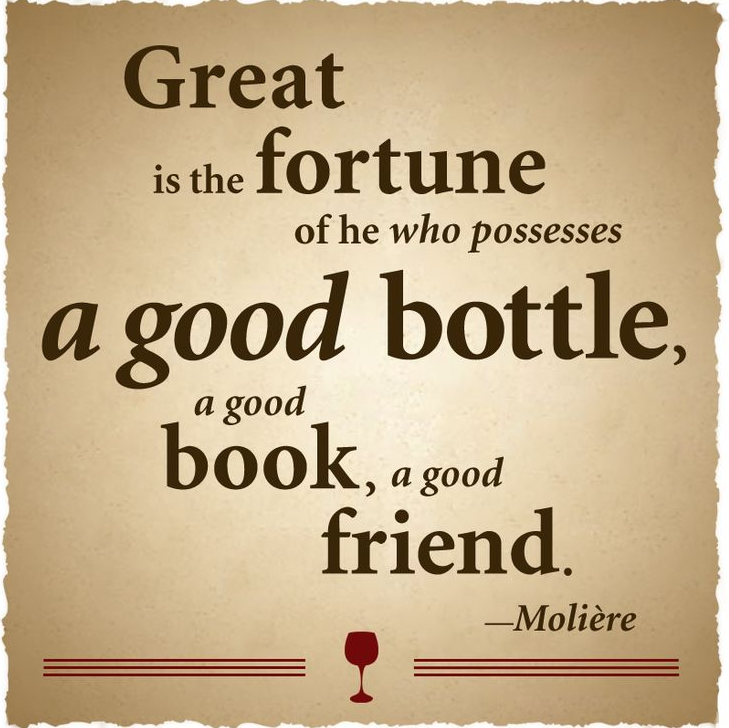 There’s been a lot of snow-shoveling here in Virginia this week.  And we don’t get that magical, powdery snow you can practically sneeze off your driveway.  We get heavy, wet cement-snow — the foil of healthy backs everywhere, mine included (I’ve had three back surgeries, and one of them was a direct result of shoveling that cement-snow).  In a normal winter, we get just enough snow to justify owning a snow shovel (3 inches here, 5 inches there).  It’s rare that we get over 2 feet in one dump.  Groan.  Happily, I mostly get a pass on shoveling snow (three surgeries is enough, thanks), but I tried to get out there and push the snow around as much as I could.  Turns out, you can’t really push 30 inches of cement-snow with a shovel, even if you try really, really hard.  And then this, from the teenager:  “Mom.  Stop.  You’re not moving enough snow to even make a difference.”  Alrighty, then.  That’s my cue to come inside and look for some wine words.  😉

A friend sent these words to me a while ago, and I put them aside for a  snowy day.  The words are from 17th century playwright, Molière (aka Jean Baptiste Poquelin), considered one of the greatest authors of French comedy.  His plays were wildly popular, and wildly controversial, especially within the Roman Catholic Church (who didn’t appreciate, comedy or not, Molière pointing out certain hypocrisies within the Church).

I can’t say I’m particularly enamored of 17th century French comedy, but I did speed-read the highlights of Molière’s L’Ecole des Femmes (The School for Wives), and found this gem:

All the ills of mankind, all the tragic misfortunes that fill the history books, all the political blunders, all the failures of the great leaders have arisen merely from a lack of skill at dancing.

Perfect.  Is it too late to add a dance-off to the format for the next round of Presidential primary debates?

Perfect, again.  Though, if we get any more snow this winter, I might amend these words to include . . . a good snow-blower!