Wine, Words and Wednesday, No. 89 (A Farewell to Pat Conroy) 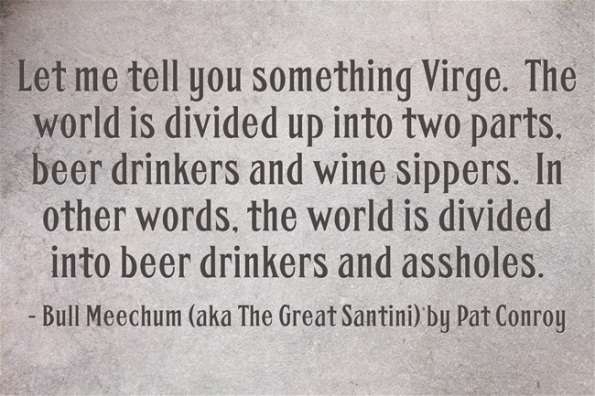 I woke up on Saturday morning to the news that Pat Conroy had died.  And it sucked the wind right out of my day.  I’ve had a crush on Pat Conroy ever since the first sentence of The Great Santini.  Conroy was one of the most gifted wordsmiths of all time and ever — I never did finish a Pat Conroy novel without needing a dictionary.  To wit, that first sentence of The Great Santini describes a Marine Corps farewell (think going away party) as obstreperously spirited. I’ve been to plenty of Marine Corps farewells.  They can be rowdy, unruly, boisterous, and raucous — sure.  But obstreperously spirited??  Conroy’s command of the English language was nothing short of utter mastery.  He could have written an instruction manual for lawn mower assembly, and it would read like a symphony.

Conroy once wrote,  “One of the greatest gifts you can get as a writer is to be born into an unhappy family.”  Conroy had unhappy covered in spades.  Most of his work is at least somewhat autobiographical, none more so than his 1976 novel, The Great Santini.  Conroy’s real family was violently unhappy when the book came out (nothing brings a family together like airing 536 pages of dirty laundry), but, well, they were a violently unhappy family in general.

The Great Santini tells the story of the Meechum Family — headed by Marine Corps fighter pilot, LtCol Bull Meechum (aka The Great Santini), a man who can generously be described as a mean son of a bitch.  Set in South Carolina in 1962, Bull Meechum runs his family like a Marine Corps fighter squadron, with an uncompromising expectation of obedience.  Bull’s son, Ben (the Conroy of the story), struggles to come of age in the shadow of his abrasive, abusive, and chronically disappointed father.

Bull is having a conversation with his friend, Virge, about the politics of Marine Corps promotions and assignments.  I should mention, the Mr. Armchair Sommelier (once a Marine, always a Marine) insists The Great Santini’s depiction of Marine Corps culture is more documentary than fiction.  Anyway, Bull complains about a fellow Colonel, saying, “Ole’ Varney sits on his duff yappin’ about wine.”  Virge attempts to temper Bull by telling him, “There is nothing inherently wrong with liking wine, Bull.”

Except in The Great Santini’s world, there kinda is.  (Before you read these words, remember I told you Bull Meechum is a mean son of a bitch.  I know piles of Marines who indulge in both grain and grape with equal affection.)

I believe that makes me an asshole.  Btw, Pat Conroy — also an asshole. 😉 (Winky-face very important, here.)  Conroy himself was very fond of wine, and even more so of food.  He even wrote a cookbook — the story of his life as it relates to food.  And it’s the only cookbook I’ve ever devoured, cover to cover.

Fair winds and following seas, Mr. Conroy.  I’m sad you aren’t here to write any more words, but grateful you left so many behind.

If anyone needs me, I’ll be binge-reading The Great Santini.