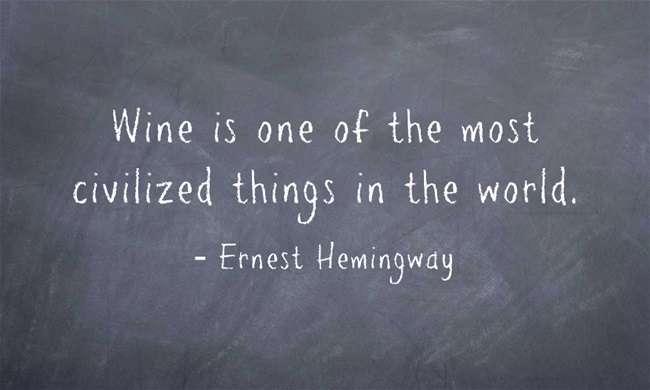 For the centennial edition of Wine Words & Wednesday, I’m circling back to one of my all-time favorites and eternal crush, Ernest Hemingway.

Today’s words come to us from Death in the Afternoon, Hemingway’s dissertation on the world of Spanish bullfighting in the 1920s and 30s.  Although a lot of the book is very technical, it’s also an examination and reflection on fear, courage, the meaning of life, and more importantly (at least for Hemingway) the meaning of death.

I rarely download Hemingway to my Kindle.  It feels disrespectful.  There’s something necessarily tactile about Hemingway.  I need to hold his words in my hands.

I first read Death in the Afternoon before a trip to Spain over a dozen years ago.  While we were on that trip, we had an opportunity to go to a bullfight.  I’ll admit I wasn’t exactly excited about the idea, but I also knew I’d regret it if I didn’t go.  When in Madrid . . .

Bullfighting is all at once passionate, bewildering, majestic and grotesque.  And really flipping hot.  We went in July (and if you’ve ever been to Spain in the summer, you know the average temperature is only 3 degrees less than the surface of the sun).  Naturally, we sat on the  sweaty side of the stadium, which I quickly figured out is where they put all the tourists.  The locals bask in the shade (you can identify the folks in the picture below as locals because they’re all wearing pants in that inferno).  Things got really exciting when one of the bulls jumped the inner permitter fence and mingled with the crowd in the shade.  I was never so happy to be sitting in the sun.

Me?  I can appreciate bullfighting as a metaphor for fear, courage, life and death — and the ephemeral nature of it all.  I just don’t have the stomach for it.  I’m glad I’ve seen a bullfight . . . but I don’t need to see another one.

On to today’s words.

If you’re a wine lover, you’ve probably seen these words before.  But you may not know that Hemingway wrote them as part of an analogy between bullfighting and wine.

In the first chapter of Death in the Afternoon, Hemingway veers off on a lengthy tangent about wine and bullfighting.  According to Hem, the enjoyment of bullfighting as an art increases in the same way that someone’s palate and appreciation for wine develops over time.  “These things cannot be learned quickly, and time, which is all we have, must be paid heavily for their acquiring.”But the words don’t end there . . .

Wine is one of the most civilized things in the world, and one of the natural things of the world that has been brought to the greatest perfection, and it offers a greater range of enjoyment and appreciation than, possibly, any other purely sensory thing that may be purchased.

One can learn about wines and pursue the education of one’s palate with great enjoyment, all of a lifetime . . . I would rather have a palate that will give the pleasure of enjoying completely a Château Margaux or a Haut Brion, even though the excesses indulged in the acquiring of it has brought a liver that will not allow me to drink Richebourg, Corton, or Chambertin, than to have the corrugated iron internals of my boyhood when all red wines were bitter except port and drinking was the process of getting down enough of anything to make you feel reckless.

Hemingway’s point boils down to this — an appreciation for bullfighting (or wine) comes with an open mind and an accumulation of knowledge.  You may not like it (bullfighting or wine) at first, but the more experience and knowledge you gather, the more your appreciation grows.

Makes sense to me.  Bullfighting and wine are acquired tastes.  And I’m constantly acquiring and refining my taste for wine.  Bullfighting, not so much.