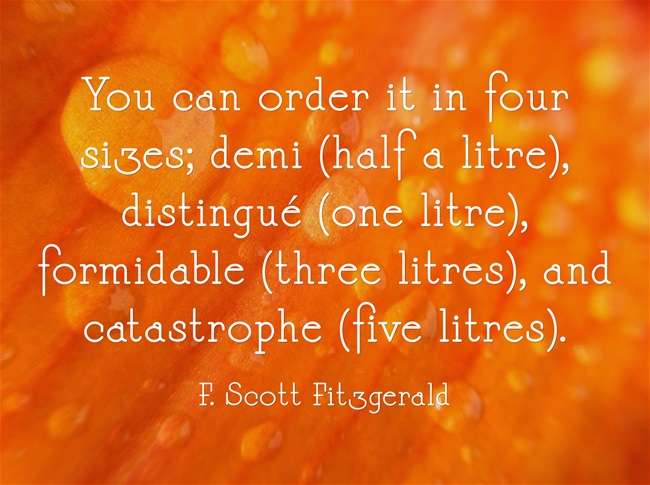 Today’s words come to us from the perpetually-pickled American novelist, F. Scott Fitzgerald.
I doubt anyone (Fitzgerald included) would take umbrage with labeling him a notorious drunk.

Sidebar:  Fitzgerald had plenty of company in drink.  A great many prominent early 20th century American writers succumbed to the siren of alcohol:  Hemingway, Faulkner, Steinbeck, Joyce, Capote, Kerouac.  Does alcohol fuel creativity or do great writers suffer from an underlying psychological disorder(s) that makes them both more creative and more likely to drink?  Hmmm. Things to ponder.

Fitzgerald’s preferred liquor was gin (he believed it couldn’t be detected on his breath), and his favorite drink was the gin rickey.  Fitzgerald and his wife, Zelda, were notorious (and often badly-behaved) partiers.  Fitzgerald believed alcohol gave him creative powers, and his writing process consisted of sitting in a dark room with a bottle of gin and . . . thinking.  After a while, he’d go for a walk, and when he returned, jot down his thoughts in notebooks scattered across his desk.

Today’s words appear in On Booze, a collection of Fitzgerald’s notebooks — his random thoughts, essays, and letters.  These are Fitzgerald’s notes on how to order alcohol (if you’re not up on your French, distingué means distinguished):

I’m not sure Fitzgerald ever ordered anything other than catastrophe.  Although, he seemed to be self-aware, observing:

Fitzgerald even wrote a brief, but damn near clairvoyant, autobiography:

In the agony of literary success, catastrophe.