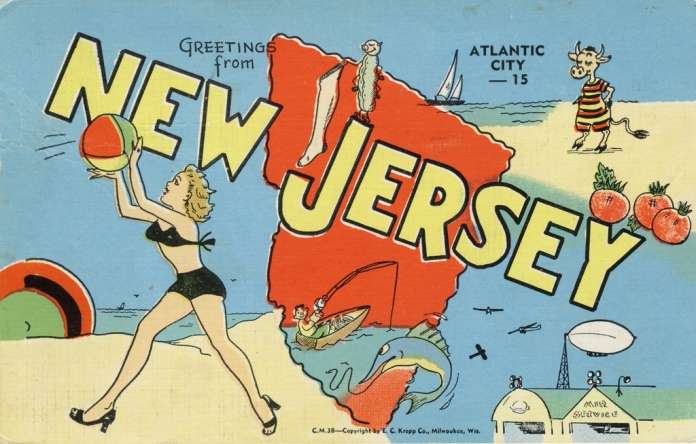 I’ve never been one to lavish much praise on the state of New Jersey.  The sum total of my New Jersey experience consists of driving through on the Jersey Turnpike (which does nothing to dispel the stereotype of New Jersey as the Armpit of America), flying through Newark International (a calamity every time), and getting lost on the way to the Meadowlands (pre-GPS days) in the dead of January, resulting in an unplanned, and downright frightening tour of what I’m pretty sure was the least “gardeney” spot in New Jersey.

But I’m always open to horizon broadening.  So, when I learned the focus of this month’s East Coast Wine Chat would be New Jersey wines, I was skeptical, but intrigued.  We talked about some of the misperceptions of New Jersey, stemming from folks whose Jersey experience has been similar to mine (less than optimal).  But we also talked about New Jersey corn (which someone described as angelic), life-changing tomatoes, and Cape May “salts” oysters.  (Btw, I didn’t see any of those things when I was lost in Newark.)

We tasted five Chardonnays from New Jersey, which would be an interesting exercise at face value, but there was a twist.  Four of the five wines we tasted were made from the exact same grape juice, but by different winemakers.

Each winery in the cooperative grew Chardonnay grapes in their own vineyards.  The grapes were harvested, and each winery brought 1,000 pounds of grapes to the William Heritage Winery, where they were commingled, and pressed together.  After pressing, the juice was divided equally between the four winemakers to take back to their respective wineries and make a Chardonnay in their own style.

Open Source is a play on the same term from the software world.  With open source software, developers are free to change the source code to create something different.  In this case, the wine grapes are the source code, and the winemakers are the developers.  Clever, huh?  All of the collaborative bottles look remarkably similar — same shape, same color, a couple a smidge heavier than others.  They are, however, sealed with the corks of the individual wineries, and each wine label is a topographic map of the individual vineyard.  Swoon.

It’s often said that Chardonnay is a blank slate grape, especially pliable in the hands of a winemaker.  And this collaboration is the ultimate proof of that notion.  The same exact grape juice was used to make four Chardonnays that are absolutely different.

Winemakers make many decisions that ultimately influence the finished style of a wine.  Some of those decisions include — fermentation temperature, the particular yeast strain used, whether to ferment in stainless or barrel, whether to encourage or inhibit malolactic fermentation (a secondary fermentation that results in a more creamy, buttery flavor), the type of barrel used for aging, the length of time a wine stays in barrel, and whether the wine is aged on the lees (dead yeast cells, which sounds gross, but can contribute some brilliant flavors and textures to a wine).

All of these Chardonnays were made from grapes from the 2016 vintage:

Barrel fermented, and aged in neutral French oak for nine months.  Stirred on the lees every two to three weeks for five months.  Basically no malolactic fermentation.  Concentrated, yet elegant flavors of pear, green apple, underripe pineapple, and toasted coconut.  Medium bodied with a searing acidity and mineral finish.

Heritage Winery
Aged for eight months on the lees in French oak.  No malolactic fermentation.  Flavors of pear, chalk, apricot, baked apple, and maybe some flan (yes, I know that sounds weird).  Superb texture and weight.

Hawk Haven Vineyard
Each bottle of the reserve Chardonnay is individually hand-numbered.  Aged for six months in French oak.  At first sip, a juicy, toasted green apple.  But then, more subdued flavors of apricot, pineapple, and coconut start to emerge.  Balanced and intriguing, with a vanilla finish.

All of the wines are varietally correct, in that they taste like Chardonnay.  But they were absolutely different.  They are all finished dry, and all saw at least some time in French oak, but none were heavy-handed or over-oaked.  The differences lie in the acidity, texture, intensity, and weight of the wines.  The influence of the winemaker’s hand is undeniable.

I was very pleasantly surprised by the “goodness” of these New Jersey Chardonnays.  In fact, I might even give New Jersey another shot.  But I’ll skip Newark this time.  Someone from New Jersey tell me where I should visit.