Come quickly . . . I am tasting nectar of the Tsars!

Last Saturday was the annual Open that Bottle Night (OTBN).  If you’ve never heard of it before, OTBN sounds like a Myers-Briggs personality type, but it’s actually a reason to open a bottle of wine.  OTBN is the brain child of Wall Street Journal wine columnists Dorothy Gaiter and John Brecher.  And the idea is a simple one — instead of waiting for that perfect reason to open that special bottle of wine, OTBN is the reason.  Quit thinking about it and just open it. 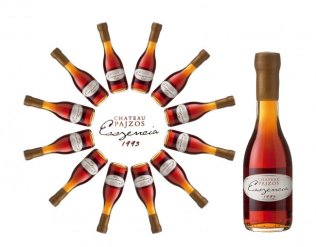 Earlier this summer, my husband bought me a bottle of 1993 Château Pajzos Tokaji Esszencia for my birthday. Esszencia is one of my bucket list wines. And I’ve been staring at it for months now, salivating, just waiting for the right occasion to open it (because apparently, my birthday wasn’t it).

Once called the Nectar of the Tsars, Esszencia is one of the rarest and most expensive wines on the planet.  How expensive?  A 375ml bottle (that’s half a standard size bottle) hovers around $375.  Quick math even I can do = that’s $1 a ml.  In a stroke of genius marketing plan, Chateau Pajzos sells their Esszencia wine in cute 100ml bottles.  It’s not any less expensive in the cute little bottle, but it feels more affordable than shelling out a car payment for the bigger bottle.

But before I scratch this wine off my bucket list . . . a little background.

Esszencia comes from Tokaj — the most famous wine growing region in Hungary.  Tokaj is located in the northeastern part of Hungary, near Slovakia.  You see those mountains just northwest of Tokaj?  They protect the region, giving it a mild climate perfect for grape growing.

Furmint is the most important grape in Tokaji wines.  It’s extremely high in sugar, and naturally high in acidity, which gives the wines great balance and aging potential.  It’s also really fun to say Furmint.  Furmint grapes are unique in that their skins become thinner as they ripen.  This allows more sun to penetrate the grape skin, and the liquid inside begins to evaporate, concentrating the natural sugars.  And then Furmint does something really impressive — it grows a second skin (I wonder if Professor Xavier knows about Furmint’s mutant talent), which seals it off from impending rot.  This means the grapes can stay on the vine long enough for Botrytis cinerea to work its magic.

The grapes used for Tokaj are affected with the Botrytis cinerea fungus, more commonly known as Noble Rot.  The fungus dehydrates the grapes on the vines and concentrates their natural sugars.  Once dehydrated, the grapes are called berries, or aszú, in Hungarian.  The aszú are hand-picked and then crushed into a paste known as aszú dough.  A base wine is added to the aszú dough and then moved to casks for fermentation.

The key difference between a regular Tokaj wine and an Esszencia wine is this:  Tokaj wines are made from pressed aszú juice, but Esszencia wine is made from free-run aszú juice.  That’s why there is so precious little Esszencia . . . and why it costs a king’s ransom.  The free run juices take an extremely long time to ferment (we’re talking years) and the alcohol content is astonishingly low.  In fact, some say Esszencia cannot technically be classified as wine because there isn’t enough alcohol in it.  It hovers somewhere around 5% ABV.

The sweetness of a Tokaj wine is measured in puttonyos, literally, a harvesting basket (I’d love to see a Furmint harvest, with rows of these puttonyos moving through the vineyard). There’s a specific grams of sugar per liter scale for puttonyos levels, but basically, what you need to know is this:  the more puttonyos, the sweeter the wine.  (A 3 Puttonyos wine will be sweet . . . but a 6 Puttonyos wine will be sinfully sweet).

So, how was the Esszencia?

Château Pajzos Esszencia 1993 ⭐⭐⭐⭐⭐/96
I was kind of hoping there would be a mini-cork under the wax seal, but it was a screw top. Oh, well.  I removed the top and took a whiff.  My first thought was balsamic vinegar.  Not the crappy balsamic you can buy at a grocery store . . . the real balsamic.  The sweet, tangy, unctuous, rich balsamic.  I’ve ever seen a wine quite this hue before — it looks like Pennzoil. In the glass, it smells like raisins and caramel apples.  It’s incredibly sweet, but balanced by wicked, focused acidity. The texture is unlike any wine I have ever tasted — viscous and velvety.  And then, a rapid-fire explosion of flavors — caramel, stewed apples, nuts, and toasted tobacco on the finish.

Wine with a halo??

I deliberately paired this wine with absolutely nothing.  Esszencia demands center stage — nothing can come before or after it.  The finish on this wine is insane!  Half-an hour later, and I can still taste it.  And the 100ml bottle is a perfect size for two adults.  A little Esszencia goes a looong way!  Esszencia is like mainlining sugar — any more than a few sips, and you run the risk of inducing diabetes.

Galileo once said, “Wine is sunlight, held together by water.”  He’s right, you know.  And if wine is sunlight . . . Esszencia is a sunset.  One you don’t want to miss!