Vino Caveat:  I don’t put a lot of stock in wine reviews.  I’m a big believer that a wine is good if you like it.  It all depends on your palate.  My zippy acidity might be your Kryptonite. Your jammy fruit-bomb might be my migraine in a bottle.  So with that grain of salt, I wrote some wine reviews . . . 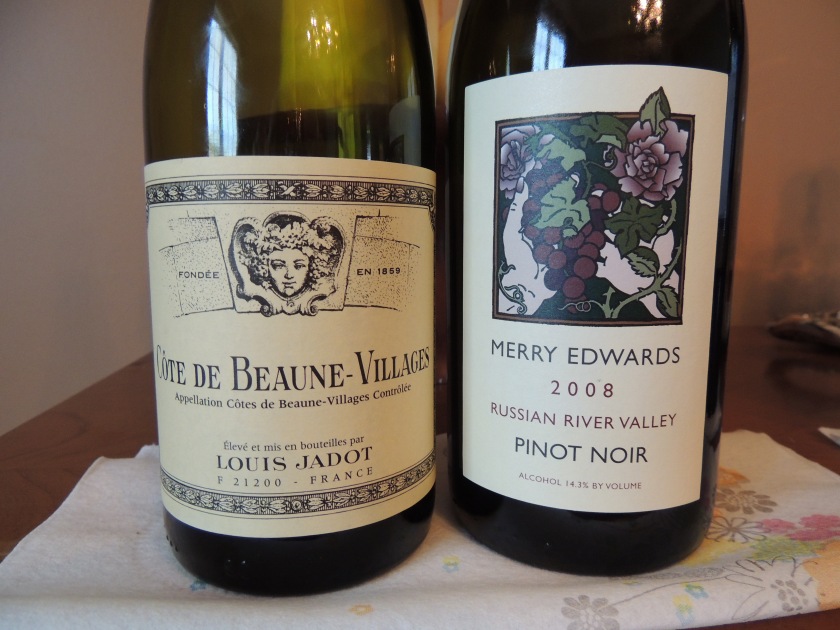 Old World Wine Notes:  Hello funk!  Pretty garnet color with loads of earth and tobacco on the nose.  A bit thin and astringent, wish there was a cherry in here somewhere.

Pairing Notes:  This pairing didn’t work for me at all.  The flavors in the sandwich killed the wine.  The wine took on this weird metallic, rusty nail flavor.  I want to blame the red pepper pesto.  I’d love to revisit this sandwich with a glass of dry Rosé. 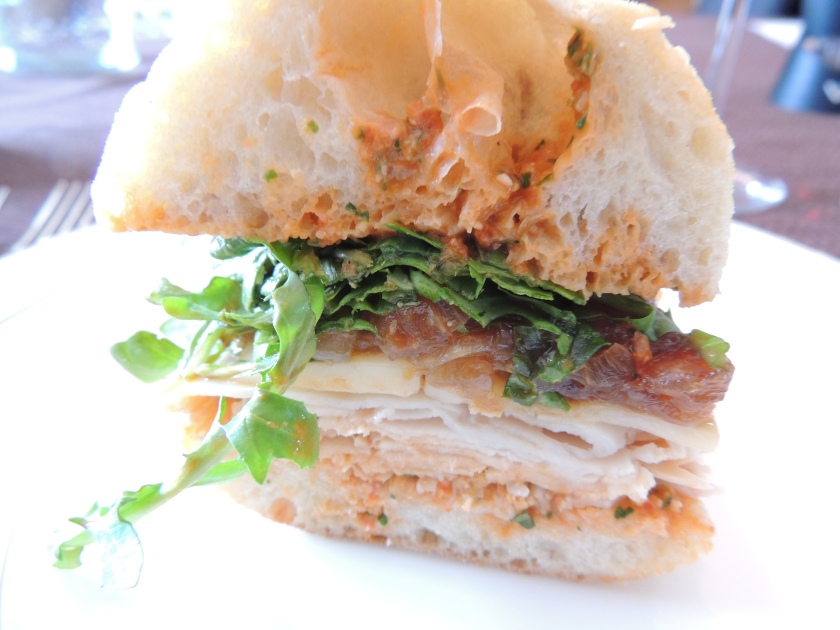 **New World Pinot and its pairing was my assignment.

New World Wine Notes:  Merry Edwards makes some gooooood Pinot.  She hits a home run year in and out.  This bottle is smooth and elegant.  Loaded with cherry and strawberry flavors.  Well balanced.  I could drink an entire bottle of this by myself.  I’d regret it the next day, but I could do it.

New World Food Notes:  I’ve been reading for a long time now that duck is one of the pairings for Pinot Noir.  I’ve never cooked duck before (a bit of a shocker considering how much my husband and son go duck hunting), but I wanted to give it a whirl.  I used this recipe:  Duck with Blackberry Sauce.  The sauce is fantastic — I could have eaten it as soup!  I wish it had thickened a little more, though.  I was surprised by the texture of the duck — more like steak than bird.  Nice flavor, not too gamey, which is a plus in my book.  I liked it, but not enough to make me start craving duck instead of cow.  And without the blackberry sauce . . . meh.

Pairing Notes:  So there’s a reason duck and Pinot are one of the it pairings . . . it works!  The only minus for me was that the wine seemed to highlight the game notes in the duck.  If you love gamey, you’ll love duck and Pinot.

Here’s my duck going into the hot cast iron skillet.  Lesson learned:  duck fat is hazardous in a hot skillet — it splattered everywhere.  I was wearing duck fat when I finished cooking this dish!  Mental note, next time . . . wear an apron. 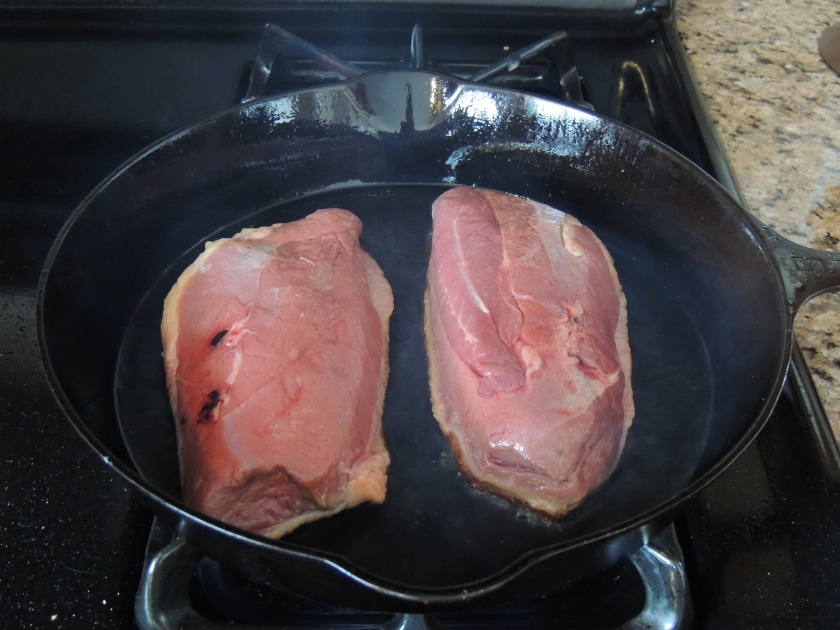 How ’bout that?  It actually looks pretty good! 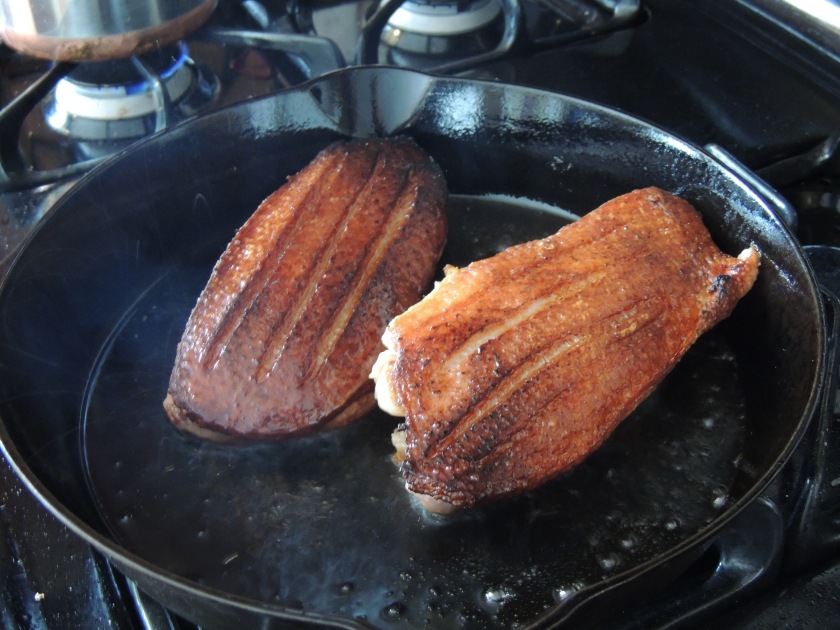 Voilà!  Duck is served . . .  (pretend the sauce thickened the way it was supposed to and you can’t see the little butter molecules). 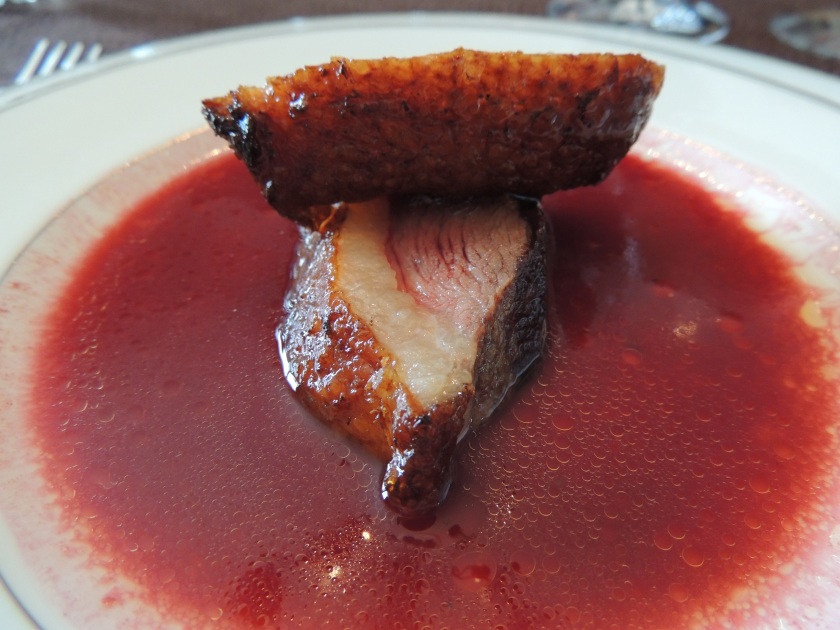 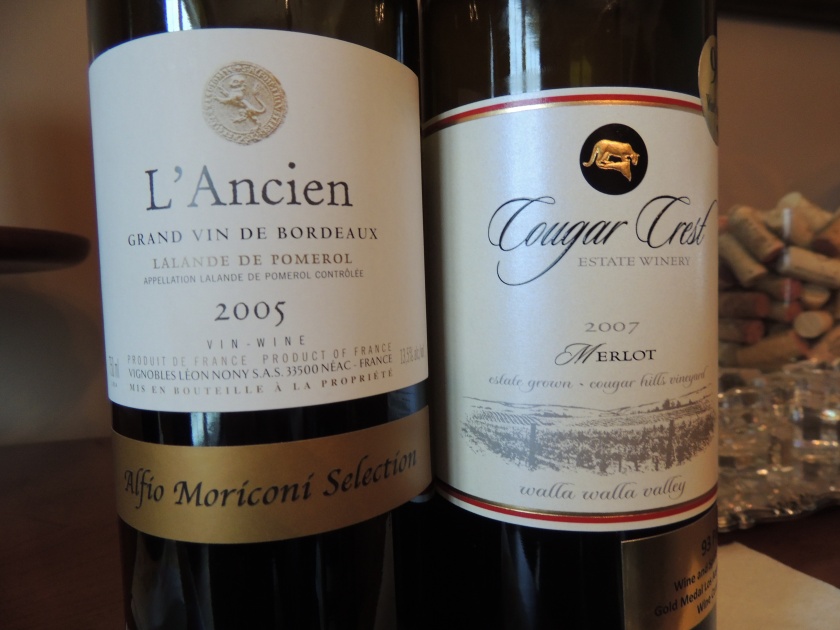 Old World Wine Notes:  Everything you’d expect from the Old World — elegant, tannic and funky.  Smells like old leather in grandma’s basement.  I loved it!

New World Wine Notes:  Eau de Bourbon!  I like bourbon (I wish I didn’t, but I do), so this was a winner for me.  Loads of coffee and chocolate hanging out in the bottle, too.  Miles Raymond (a la Sideways) is daft . . . Merlot is awesome!

Food Notes:  Frisee Aux Lardons with Chicken Liver Vinaigrette.  (We had a last minute cancellation, so we only had one food pairing for both Merlots).  This is an Anthony Bourdain recipe, so you know you’re about to eat something brazen and adventurous.  Lardons (French for bacon-bits) are salty goodness.  And this is hands-down the most adventurious salad dressing I’ve ever eaten.  Chicken livers?  I loved it — except for the Roquefort Cheese.  Roquefort Cheese is a member of the Moldy Cheese Family, and I will never understand why anyone wants to eat it.  But my moldy-cheese loving friends assured me it was amazing with the Merlot.

Pairing Notes:  The lardons and the chicken livers are salty . . . pushing the salt envelope all the way to the edge of too salty, without going over.  I was worried what that would do with the Merlot, but it worked.  The undercurrent of meat kept it all in balance with the Merlot. 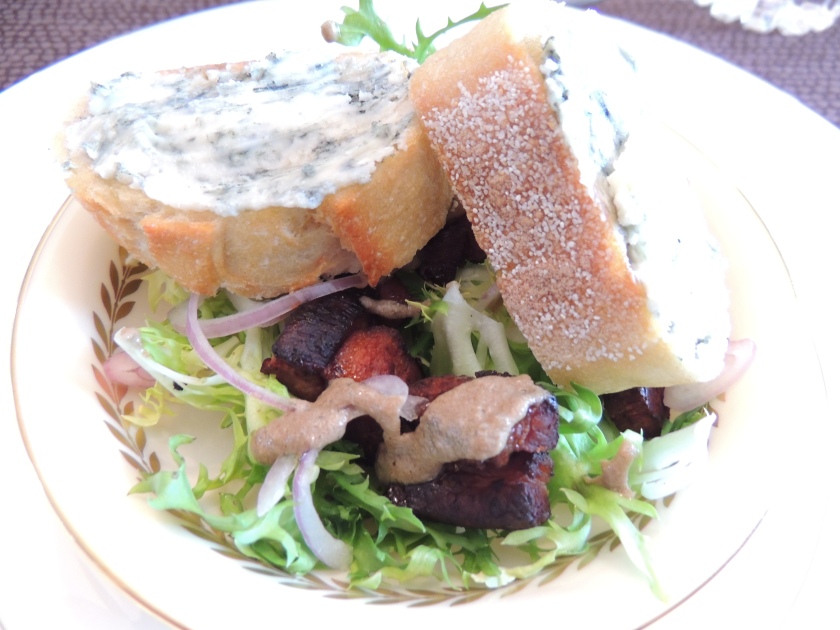 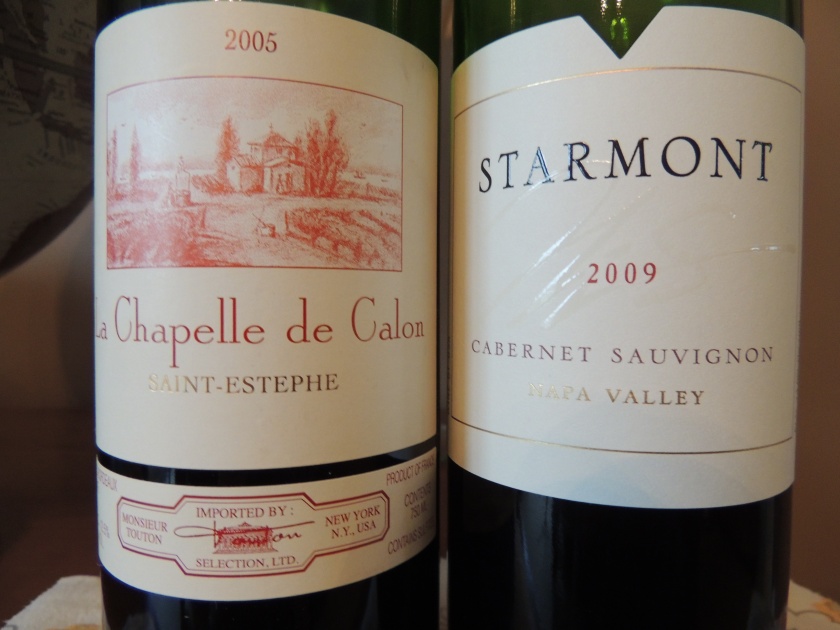 Old World Wine Notes:  Pretty ruby color.  A little stingy with any kind of aromatics.  Maybe a whif of black currant.  A reserved wine with higher tannins.  I’m thinking this would really benefit from a few more years of time-out in the basement.  Really interesting vegetal and herbal notes on the finish.

Old World Food Notes:  Lamb Chops with Frizzled Herbs  I’m not usually a lamb fan.  It has nothing to do with the lambs being cute, either.  I just think lamb has an odd taste.  But this dish, I liked.  I think it was the frizzled herbs (what a great word, frizzled) that put it over the top.  The flavor balance was superb.

Pairing Notes:  The wine seemed to accentuate the gaminess of the lamb.  There’s that odd taste again.  But it really worked nicely with the frizzled herbs — a nifty complement to the same flavor notes in the wine. 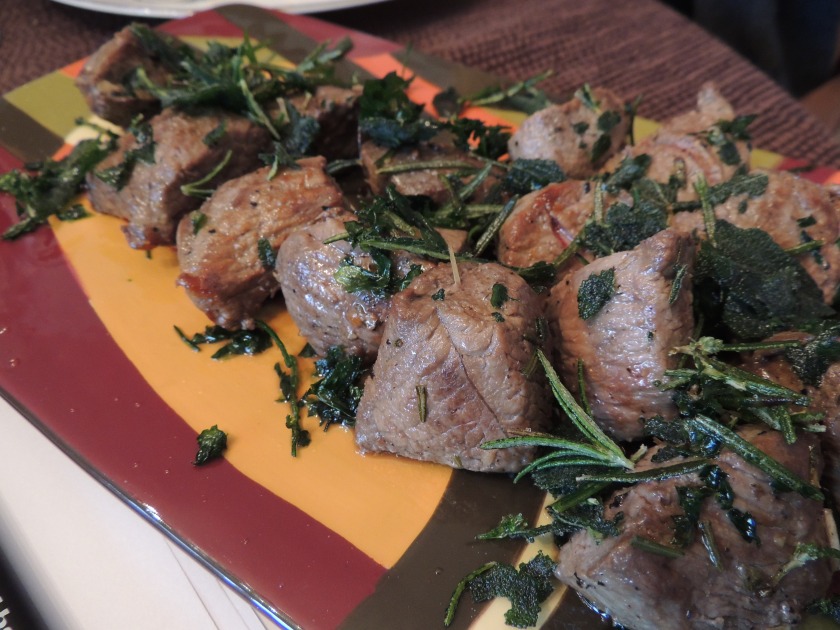 New World Food Notes:  Muffin Tin Onion Gruyere Potato Stacks.  You know when you hear humming at the table, food is good.  Lots of humming going on for the potato stacks — as tasty as they are pretty.  Delicious mix of flavors — how could anything with Gruyere and heavy cream not taste good?

Pairing Notes:  I really liked the wine, and I really liked the potatoes.  And while this pairing wasn’t bad by any means . . . I preferred both the wine and the potatoes solo.  Although, the Cab is playing nicely with the thyme.  I suspect the cream may be a little delicate for the Cabernet.  I had a swallow of Merry Edwards Pinot left in my glass (OK, I poured myself a swallow) and tried it with that.  The lighter bodied Pinot worked better with the cream for me. 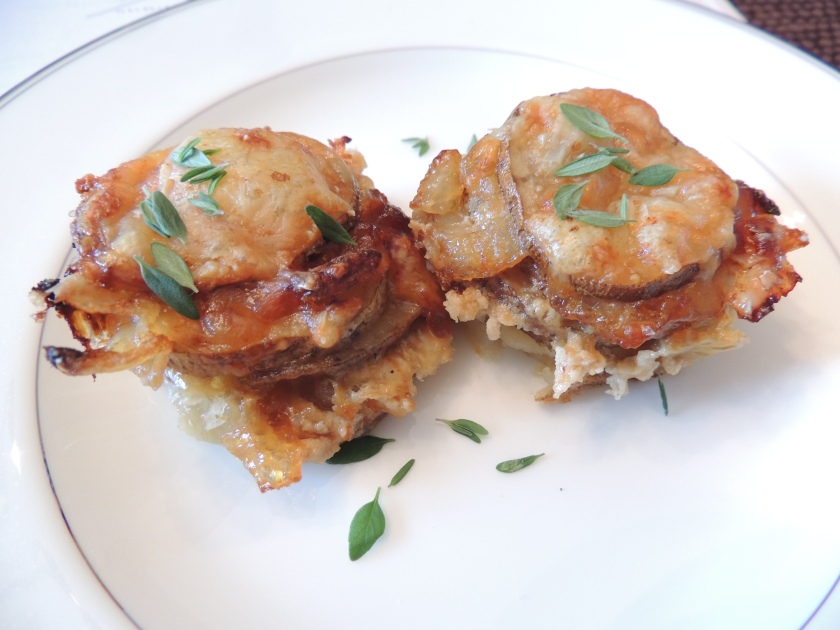 Bonus Cabernet Tasting:  Santa Julia Organica Cabernet Sauvignon, Mendoza 2011.  This was a curiosity/impulse buy from one of my girlfriends.  It’s bound to happen — you linger too long in the wine store and you come out with all sorts of things you didn’t go in there for!  Anyway, this is an organic wine from Argentina. Completely aged in stainless steel.  A great big glass of fruit.  Lacking in complexity, but for $6?  Why not? 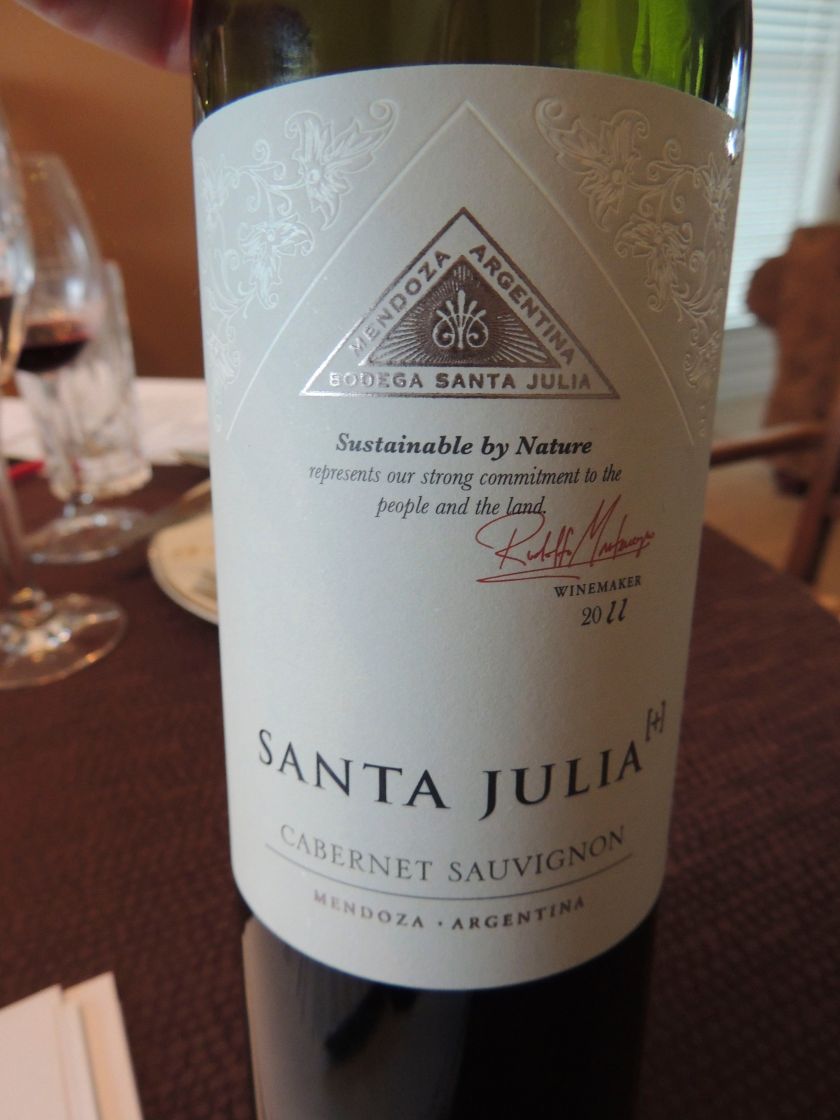 Red Velvet Cupcakes for dessert . . . an abomination with red wine, but they hit the spot after our mostly meat parade. 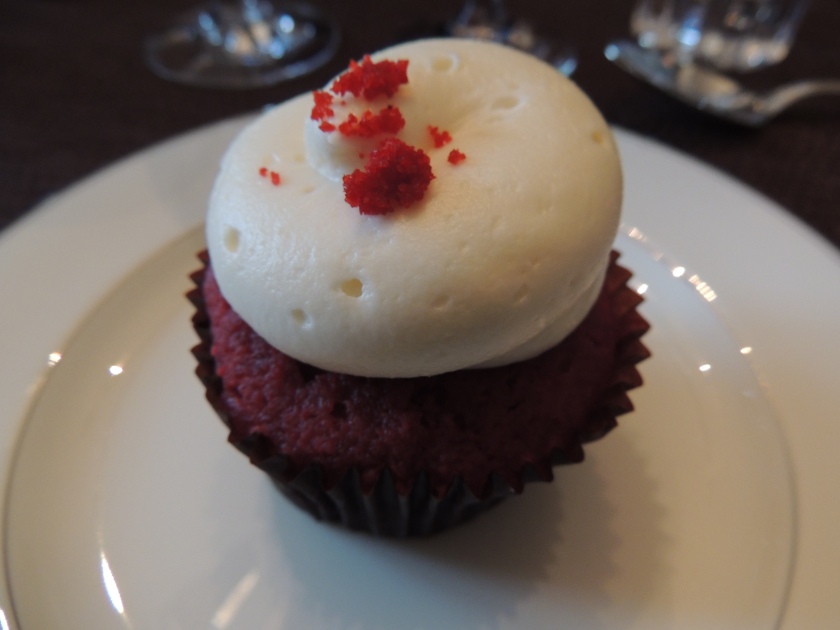