Drinking Wine with the Dowager Countess of Grantham

When I grow up, I want to be the Dowager Countess of Grantham.  Oh, how I’ve missed her.  But as of last night (in the US of A) she’s baaaaaccckk!  And in superb form.  My favorite DCG quote of the night:  “There’s nothing simpler than avoiding people you don’t like.  Avoiding one’s friends, that’s the real test.”

A few weeks ago, I received three sample wines from the Biltmore Estate in North Carolina.  The Biltmore Estate is sometimes compared to Downton Abbey (they’re both castles owned by über-rich people), so I thought premiere night would be the perfect occasion to sit down for a taste.  Oh, Carson? Be sure to set both white and red wine glasses at the dinner table tonight.

Built during the height of the Gilded Age (between 1885 and 1889), the Biltmore Estate in Ashville, North Carolina was home to George and Edith  Vanderbilt, and remains owned by Vanderbilt descendants today.  The house was designed in the French Châteauesque Style (meaning, if you can’t get lost inside, it’s not big enough).  The estate has 250 rooms (33 bedrooms, 45 bathrooms and 65 fireplaces).  You need a heck of a downstairs crew (and a lot of firewood) to manage that.

By comparison, Highclere Castle, the real Downton Abbey, was built in 1839 on the foundation of a castle dating back to the 8th century (that would have been right around the time Vikings were plundering most of Europe).  Highclere Castle is the home of the Earl and Countess of Carnarvon, and touts 60+ bedrooms, an unknown number of bathrooms (seriously, this seems to be some kind of British state secret) and 25 fireplaces.  Fiona, the eighth Countess of Carnarvon, was once quoted as saying, “I suppose if you know how many rooms you’ve got, you haven’t got a very big house.”  Alrighty then.  It appears I haven’t got a very big house. 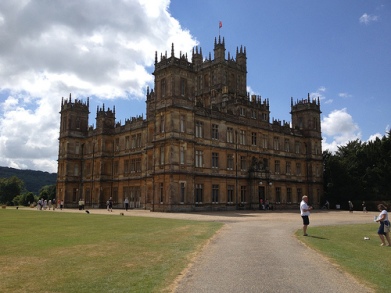 Wine at the Biltmore Estate was the vision of George Vanderbilt’s grandson, William Cecil.  The first vines were planted in the early 1970s.  Admittedly, North Carolina isn’t known for its great vineyards, and there has been a lot of wine grape trial-and-error at Biltmore.  But today, there are six grape varieties that “have proven to be particularly well-suited for western North Carolina terroir and the microclimate of the estate” — Riesling, Chardonnay, Viognier, Cabernet Sauvignon, Cabernet Franc, and Merlot.

The Mr. Armchair Sommelier and I lived in North Carolina while he was stationed at Camp Lejeune — this would have been the early 1990s.  I remember tasting a few North Carolina wines during that time, and they fell squarely into the avoid at all costs category.  But that was over 20 years ago.  I’m anxious to taste the evolution of North Carolina wines.

All three of my sample wines are from Biltmore Estate’s “American Series”.  Grapes for this series are selected from several partner vineyards across the country.  Only one of the wines, the Cabernet Sauvignon, has any grapes sourced from North Carolina.  So, I’m not really tasting the terroir of North Carolina as much as I’m tasting Terroir d’Merica, made at the Biltmore Estate.  As near as I can tell, these are Biltmore Estate’s entry-level wines.

Biltmore Estate Pinot Grigio 2013 ⭐⭐/84 (Good)
Pinot Grigio “with touches of Sauvignon Blanc and Chardonnay”.  Sourced from California (90%) and Washington (10%).  Pale, almost clear in the glass.  Nose is young and clean — aromas of green apple and lemon.  Dry to off-dry, light-bodied, slightly-acidic, with tart grapefruit and pear flavors.  Not terribly complex on the back end, but a fresh and pleasant wine.  13.6% ABV.  $12.

Biltmore Estate Pinot Noir 2012  ⭐⭐/83 (Good)
Pinot Noir “with a touch of Syrah”.  Sourced from California.  A clear, pale ruby color in the glass.  Nose is young and slightly candied — strawberry jam comes to mind.  Just a touch of faint Pinot funk on the nose.  Light-bodied, somewhat diluted flavors of strawberry, white pepper and smoke.  The finish is a little underwhelming, but the vanilla that lingers is nice.  14.2% ABV.  $17.

Biltmore Estate Cabernet Sauvignon 2011 ⭐⭐/84 (Good)
A blend of Cabernet Sauvignon, Syrah, Merlot, Cabernet Franc, Grenache, Malbec and Pinot Noir.  Sourced from California (46%), North Carolina (45%) and Washington (9%).  A medium ruby color in the glass.  Nose is young — I’m getting plum, tar and cedar.  A little unruly upfront, with flavors of currant and cranberry.  Finish doesn’t stick around for long, but I do get a passing and intriguing cocoa note.  13.6% ABV.  $17.

Overall, these three Biltmore wines have pole-vaulted over the last NC wines I tasted in terms of quality.  A solid foundation of good wines.  The Dowager Countess approves.

Let’s retire to the drawing room for brandy, shall we?