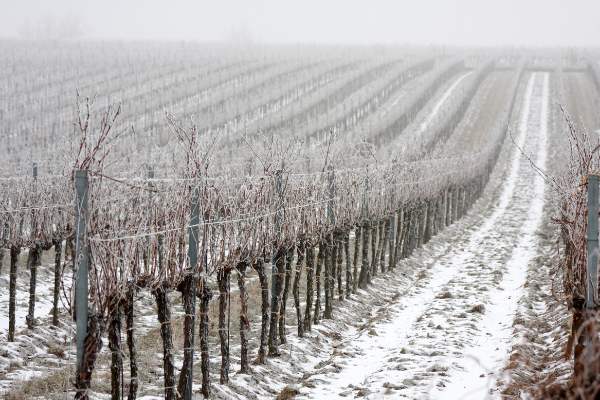 You may think dessert wines are for grannies and fancy pinky-up wine drinkers but we’re here to tell you that after you try it once, you will fight a dinner guest over the last glass of Icewine.

Many a wine drinker has shared the same reaction when trying Icewine for the first time. It usually goes something like: Eyeballs rolling into the back of their head and a single uddered sentence, Damn, that’s gooood! 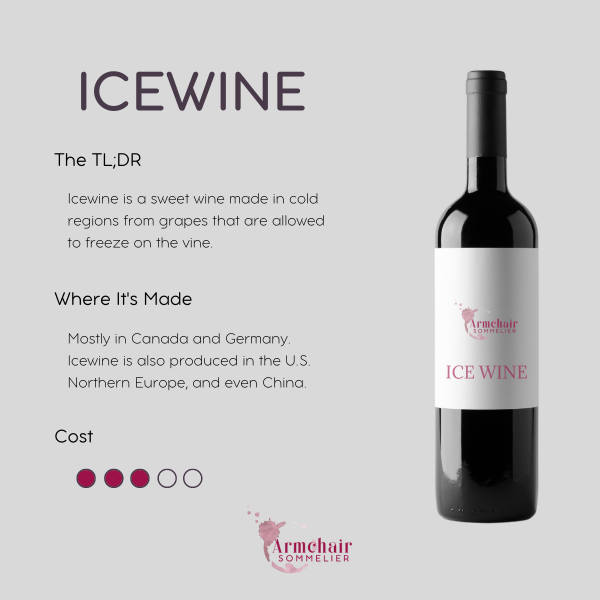 Well, it’s definitely not wine with an ice cube in it . . . that makes good wine bad and wine lovers cry.

Icewine (if you’re in Canada) or Eiswein (if you’re in Germany) is a sweet wine made with grapes that have frozen while they are still on the vine. The grapes are allowed to hang on the vine well past the time of harvest, exposing them to everything Mother Nature can throw at them — temperature extremes, storms . . . and hungry animal critters. Over time, the grapes dehydrate, partially freezing and thawing several times before they are picked, causing a glorious concentration of natural sugars in the grapes.

The grapes aren’t picked until outside temperatures reach a magical, sustained -8ºC/18ºF. At that time (and not a second before) the grapes are harvested and go immediately to the winery for pressing. As the frozen grapes are pressed, any water stays behind in the form of ice crystals (because water freezes before sugar), and what comes out of the press is the coveted, concentrated juice that makes Icewine.

The key difference between Icewine/Eiswein and other decadent dessert wines like German Trokenbeerenauslese, Hungarian Tokaj or French Sauternes, is that Icewine grapes are not plagued by Botrytis (Noble Rot), the good fungus that makes those wines possible.

Credit the Germans who invented Icewine by happy accident. Sometime around 1794, there was an unexpected, very early freeze in the vineyards of Germany. And instead of making compost out of their frozen grapes, the farmers decided to go ahead with harvest and then, Eiswein happened!

Those farmers had a vision! If this happened to our grapes at harvest time we probably would have through, we’re screwed . . . not let’s pick ’em and press ’em. But that’s why we didn’t invent Icewines and some eighteenth-century Germans did.

Where Is Icewine Made

Not in the Bahamas, that’s for sure. Icewine can only be made in areas of the world where it’s cold enough for grapes to actually freeze on the vine. Canada and Germany are the top ice wine producers in the world. Germany has been making Eiswein since the 19th Century; Canada entered the Icewine game around 1984. Canada’s largest Icewine producer, Iniskillin, is located in Niagara. I’ll bet Niagara is beautiful in the summer. Hmmm . . . Field trip?

In the US, the Finger Lakes region of New York, Michigan, and parts of Washington state are making all kinds of exciting waves in Icewine.

Latitude is everything! Icewine is such the rage these days that new regions are getting en in the game, there are even some nice Icewines coming out of China.

What Kind Of Grapes Are Used To Make Icewine

Icewine is characterized by a high level of acidity, that’s what makes it so special. A wine this sweet without enough acidity to balance it will taste like something from the syrup bar at IHOP. Almost all Icewine is made from grapes with high levels of acidity — Riesling, Vidal Blanc or Cabernet Franc. 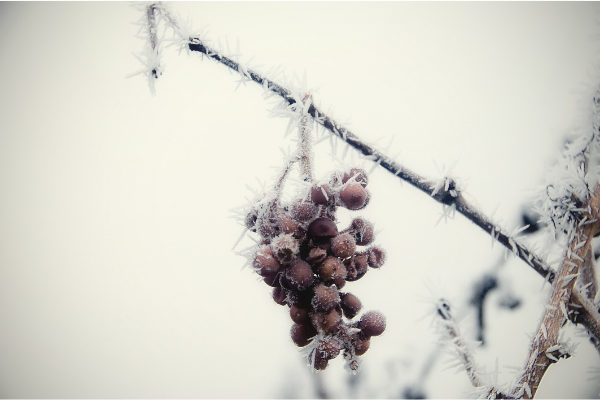 Why Is Icewine So Expensive

A good, authentic Icewine will run you $30-40 on the low end, and easily into triple digits on the high end. And that’s for a little 375ml half bottle. Why so expensive?

Making ice wine is a risky business. You’re at the mercy of Mother Nature, and she’s moody. If the grapes rot before there’s a freeze, then you have a pile of rotten grapes and no Icewine. Or if a herd of hungry deer snacks on your crop before you can harvest them, again, no Icewine for you!

You also need a quick-reaction force of workers who are willing to drop everything and come running to the vineyard when it’s “time” to pick the grapes. And then you get to pick grapes, by hand, for several hours in the middle of the night, in the cold.

Once you get the frozen grapes into the winery, you have to press them — before they can think about thawing. And the juice that comes out of the press is a trickle, not a geyser. It’s usually 15% of what you would get during a regular press. There’s just not much of the stuff to go around.

If you remember your ECON 101, this low supply combined with ever increasing demand means prices are going to be pretty high.

Why couldn’t you just pick the grapes really late and then throw them in the freezer?

Enter controversy. Some wineries use a process called cryo-extraction, which artificially freezes harvested grapes to replicate the natural freezing on the vine. Cryo wine is less risky and less labor intensive, so it’s about half the price of a true Icewine. I think of it as Cubic Zirconia wine — it’s still really pretty, but it’s not the real thing.

The word Icewine is actually trademarked in Canada by the Vintners Quality Alliance (also known as the Canadian Wine Cops). If you put the word Icewine on your label, then you must follow the rules (there are more rules than this, but they’re boring, so let’s hit the highlights):

The Germans have similar, very strict regulations governing the production of Eiswein. No shock here as the Germans aren’t exactly known as a loosy goosey, throw the rule book out the window kind of people.

Pacific Rim Winery in Washington makes a cryo-wine from Riesling called Vin de Glaciere. It sells for about $18 and got a 90 point Wine Spectator Rating.

How To Serve & Pair Food With Icewine

Enough of the learning, lets’s put a few Icewines in the ring and see who comes out on top and who goes home with a bloody nose.

Inniskillin Winery is a world-renowned Canadian Icewine producer and their Vidal Icewine is one of the best. At $59.99 a bottle, it may be a bit pricey for some, but it’s well worth the investment. With its perfect balance of sweetness and acidity, this Icewine is a true masterpiece.

This dessert wine is a real punch in the tastes buds giving you a taste of red and green apples, tropical fruit, and honeysuckle. Serve this luscious full-bodied wine ice cold.

Reviewers think pretty highly of the Vidal Ice Wine giving it 4.4 out of 5 stars in Vivino.

The Jackson-Triggs Niagara Estate Reserve Vidal icewine is a dessert wine made from the Vidal grape. The wine is produced on the Niagara Peninsula, in the province of Ontario, Canada. The wine has a sweet flavor of honey, apricot, and tree fruits.

This Canadian ice wine is often compared to Sauternes, but sports a fuller body giving drinkers a fantastic mouthfeel.

Reviewers on Vivino give the Jackson-Triggs Niagra Estates Reserve Vidal 4.2 out of 5 stars.

The Peller Estates Cabernet Franc Icewine is a dessert wine made from the Cabernet Franc grape. The wine has a sweet flavor of honey, apricot, and tree fruits.

This Canadian Icewine is a bit different than the others, as it is made with Cabernet Franc grapes. This gives the wine a unique flavor profile, with dark fruit flavors such as blackberry and currant.

Note that this bottle is quite spendy coming in with an average price of $99 per half bottle.

Reviewers on Vivino give the Peller Estates Cabernet Franc icewine 4.3 out of 5 stars.

Inniskillin Riesling is one of the best ice wines made from Riesling grapes. The wine has a sweet flavor of honey, apricot, and tree fruits.

TInniskillin’s Riesling Icewine is made with Riesling grapes (as the name suggests, duh). This gives the wine a unique flavor profile, with floral and citrus flavors. The Reisling grapes also soften the wine when compared with ice wines made from Vidal grapes.

The Riesling Icewine is also priced by half bottle and goes for $89.99 for the half bottle.

Reviewers on Vivino give the Inniskillin Riesling icewine 4 out of 5 stars.

Inniskillin Cabernet Franc Icewine is from the Cabernet Franc grape. This wine is still made by freezing the grapes on the vine and then harvesting them when they are still frozen making it a true ice wine.

This wine smells fantastic, although when served cold it is quite hard to get the normal notes found in Cab Franc. It is not a sweetness bomb thanks to a nice balance between sweet and spicey flavor flabors. It tastes of strawberry, raspberry, and red fruits in general. The winemakers did a fantastic job on this one!

Reviewers on Vivino give the Inniskillin Riesling icewine 4 out of 5 stars.

And The Winner Is

All of these wines will make you smile!